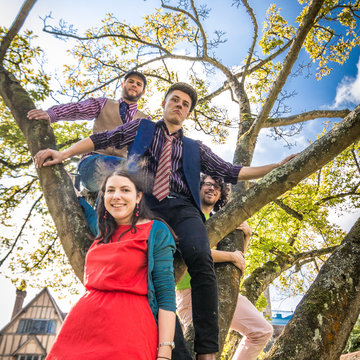 About Monkey See Monkey Do

Monkey See Monkey Do is a band of four young musicians from Southampton and London. Aaron Horlock (guitar, lead vocals), Sam Horlock (fiddle, backing vocals), Helen Gentile (clarinet, backing vocals) and Matt Aldous (bodhran, backing vocals) work together to create arrangements of folk songs and tunes as well as writing material of their own. Their main influences are from English and Irish folk songs, with a few European folk tunes thrown in for good measure! Since 2015, Monkey See Monkey Do has performed at a number of prestigious venues across the south of England, including Winchester Folk Club, The Fo’c’sle Folk Club and Folklights. Having taken time to hone their repertoire since the release of their EP, ‘Colouring Outside the Lines’ (2014), the band has since released their debut album, ‘The Night Out’ (2018) available on all good streaming platforms. Monkey See Monkey Do are performing at major folk festivals in 2021, including Purbeck Valley Folk Festival and The South Downs Folk Festival. Critical review of The Night Out: “A cracking album” – Mike Harding (ex-host of the BBC 2 Folk Show) “Thoroughly enjoyable” – Songlines Magazine “A genuine delight” – FATEA Records

Absolutely. This is a really popular request and we actually offer this service for free. If you'd like a DJ service via our PA after the final set until the venue closes, we provide this for an additional fee.

Yes, absolutely! We have a fully PAT-tested PA, lights, instruments and sound equipment.

Thank you so much for organising a fantastic ceilidh on Saturday night for our daughter's wedding party - your music was just what we needed and you had everyone up and dancing!! We've had loads of lovely comments from our guests and I will certainly be recommending you if anyone is after a band!!

"Fantastic music. A really special addition to our big day!"

"Just a fantastic young folk band with a great mix of tunes and superb stage presence!"