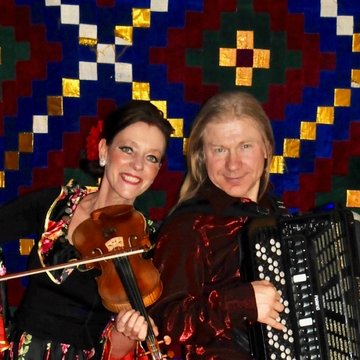 Mazaika have been performing together for over 20 years since their first chance meeting in the Tsars Bar at the Langham Hilton. Their shows are full of Russian Soul, Tango Passion, Classical Virtuosity and sparkling humour! Their vast repertoire includes Russian folk and Gypsy, Classical, Opera, Argentine and Russian Tango, Jazz, Latin, Italian, French Chanson, Gypsy Swing, Klezmer, Viennese waltz, Retro Pop, Irish, Bluegrass, Shanties and evocative original material inspired by all of the above. And if its not in their repertoire they can learn almost any song or piece of music for a negotiable fee! They can perform acoustic in a very intimate setting, perhaps as a surprise popping up incognito...but they can also fill a stage of any size. They are perfect for weddings, providing both background music during the drinks reception and a surprise showstopper or two between courses at the wedding breakfast. And you can be sure they will get every generation and every nationality on the floor with their dance set! Haven't popped the question yet? Let them help make it a yes! Mazaika have accompanied successful marriage proposals including aboard a private jet, a gondola, the Orient Express, the London eye, and several romantic serenades under windows! They are also great for Birthday and Christmas parties, Anniversaries, Bamitzvahs and pretty much anything else! They have their own sound systems to suit any occasion including radio mics so they can roam even at a large function and they are usually pretty successful taking requests! They also love to work totally acoustic. Mazaika have played for celebrities, including Sean Connery, Sting, Roger Moore, Hal David, several major Royals and most recently Russell Brand! They have worked with notable artists including Antonio Forcione, Fascinating Aida, Nitin Sawhney and Akram Kahn and Igor appeared on screen playing Russian song Dark Eyes in the David Cronenberg film Eastern Promises. Notable venues include: The QEH, The Purcell Room, St Johns Smith Square, Cadogan Hall and 3 successful runs at Edinburgh Fringe Festival, plus many Summer Festivals including Latitude, Glastonbury, Womad and Broadstairs Folk Week. They have worked as a Cabaret on top cruise lines including Royal Carribean, Holland America, Saga Princess and Fred Olsen. They have played in most of Londons top Hotels including The Savoy, Ritz, Hiltons, The Lainsborough, Browns and the Sheraton Grand. Cabaret and Burlesque appearances include Black Cat Cabaret at Cafe de Paris, Flash Monkey, Yes Yes Yes, Dusty Limits Late night Cabaret at the Bongo Club (Edinburgh festival) and Count Indigos nights at Madame Jojos and Bethnal Green Working Mens Club. 'Hugely entertaining... the duo frequently brought the house down''**** The Scotsman [Edinburgh Festival] 'An evening of magic and passion’ The Independent. “A lovely tenor voice…by the end of the evening the Purcell Room had become a tavern” The Independent ' after a decade or so in London, he has lost none of his native musical ability on accordion or as a bel canto tenor. The duo's irreverence, including introducing Harrison's virtuoso violin flourishes as if playing at the Queen Vic, and sundry comic turns, help give their musical sketches a real sense of pace. Yet for all their larking around, when the music demands gravitas and expression, it's there in spades. '**** The Herald Their music feels like a dazzling escape into a world where people dance on tables with roses between their teeth." ***** Tina Jackson, Metro "Sheer heaven - stirring, passionate and highly entertaining” *****The Three Weeks review, Edinburgh Festival “Wistful accordion… the worlds first headbanging accordionist” The Guardian “You are the best entertainer I’ve ever seen, and I saw Elvis!!!” Audience member at Bethnal Green Working Men’s Club

We are a very versatile and full sounding duo and most flexible as such. But we often add musicians depending on the requirements of the client and can add anything from an extra guitar or percussionist/drummer to string ensemble, flute and drums, Gypsy swing rhythm section or authentic Russian folk instruments.

We can provide iPod service when we are bringing large sound equipment.

“We usually set up about 1 to 1.5 hours before the performance time. If we are using a PA we can provide a free playlist service to help set the atmosphere and get your guests ready for our live performance!”

Yes - we either perform acoustically or with microphones attached to our instruments so we can move around freely.”

A small high quality PA is included in our quote but we can discuss bringing a large PA at an additional fee.

“If a song or piece isn't included in our song list there may still be a chance we already know it. If there is a special song you'd like us to learn we are happy to do this for you. There is a fee of £30-50 for this service depending on complexity of the request to take into account rehearsal times etc.

All prices include:Small PA if necessary, larger PA may have additional charge. Travel up to 2 hours from Central London. Skype/Phone consultation. Programme tailored to your event from our large repertoire.
Mazaika

LB
Laura B
9 months ago

Sarah and Igor MADE our Christmas dinner. They were absolutely fantastic and way exceeded anything we could have dreamed for the evening. Truly unique performers with enormous talent. Without question would book them again, Laura & Russell Brand x

So sorry not to have replied to this review…i thought i had! This was the most beautiful fun event and the hosts and guests were great. They asked for everything from Christmas carols through gypsy music to Abba and we managed to do it all! Definitely a 5 star occasion!

Mazaika were fantastic and by the end of the night they felt like family. They read the room and entertained all guests Russian or not. The music was fantastic, energy was high, and can’t wait to book them for our next event. Many many many thanks to Mazaika. Our wedding would not have been the same without them!

AS
Alice S
2 years ago, for a Wedding in Hampstead

I had the pleasure of having Mazaika band play at my and my sisters wedding. The magical ambience both Sarah and Igor is phenomenal. Not one of the performances are the same and our guests could not get enough of the musical entertainment. We also had guests from different cultural backgrounds and I am every single time so impressed on how diverse Mazaika’s music interpretation stretches. From tango, klesme, classical to Russian and modern. There is something beautiful for everyone. Many of my friends then went on to have Mazaika at their private birthday or dinner parties . I can highly recommend the so professional and harmonic duet.

Mazaika are a duo I always love having to perform. They are incredibly talented and have such a fascinating way with composition and interpretation of music. Truly a joy to see perform Bobby Mizen