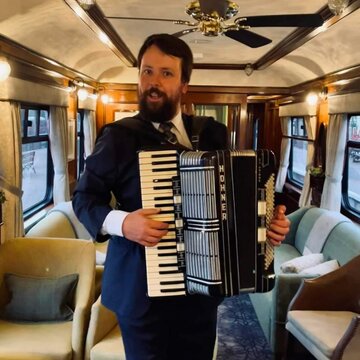 Matthew Maclennan Scottish Dance Band plays for ceilidhs, dances, concerts, festivals, weddings and parties all over the UK and beyond. The band has many years experience playing at functions and parties. Matthew Maclennan has been playing the accordion since the tender age of 7 years old! He has been performing on stage since he was 12 years old. Matthew has performed as a soloist, in other bands and has formed his own Scottish Dance and Ceilidh Band. The band was formed in 2005 and Matthew has been performing professionaly since 2010. Since 2009 Matthew and his band have been recording on BBC Radio Scotland’s flagship Scottish Dance programme “Take the Floor”. The band features regularly on this show. Matthew Maclennan and his band released, “Traditionaly Inspired”, their debut album in 2014 which was awarded “Album of the Year” in 2015 by the National Association of Accordion and fiddle clubs. Also in 2014 Matthew Maclennan Scottish Dance band was nominated as “Dance Band of the Year” at the Na Trads in Inverness. Matthew Maclennan has made trips abroad to play for weddings in France, Caledonian Societies in Kenya, Oman and Norway, The British Army in Germany, Scottish country dancing in Spain and the Netherlands. He looks forward to travelling to new places either as a soloist or with the band. In 2017 Matthew won the “All Scotland Traditional Accordion Championship” at the Perth Accordion Festival. Matthew and his band continue to enjoy playing for all events from small country halls to big ballrooms and hotels.

We have performed in all sorts of venues from country halls to full size theatres from Shetland in the north to the South of England. All venues catered

We can be flexible with timings. Please just let us know and we can discuss the details further.

We can provide a DJ set for your party. This can be tailored to your tastes. Please let us know your favourite genres and acts and we can make sure to include this.

Usually we take about 1 hour to set up. Backround music can be played once we are set up and ready to go.

Our tunes are mostly from the traditional genre. If you have particular favourites then please just let us know and we will include them in our sets.

Yes. We do not assume the venue has PA.

Yes. Please do not hesitate to ask for any requests that you may have. If you have a tune that is special to you then just ask and we will be happy to play this for you.

I booked Matthew and his two colleagues for my daughter’s 21st birthday in October 2021. His booking system was fair and simple, paying a small deposit until just before the event when full payment was required. I had arranged for them to start playing around 9 pm and they arrived early to set up. The food and speeches went on for much longer than anticipated so they didn’t start playing until 11pm but they never questioned it and never complained. They played for 2 hours and were BRILLIANT! Many of my daughter’s friends had never Ceilidh danced before but the floor was full for the whole 2 hours and everyone was so complementary about the band and the music. They really made the party a success for my daughter, and I would happily book them again. I couldn’t recommend them more highly for any event you may be holding. Anna Traquair