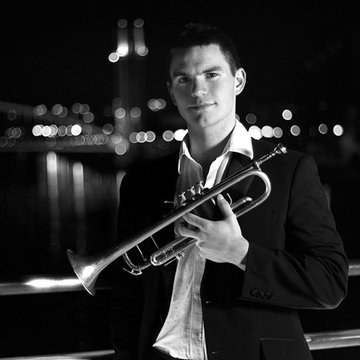 RNCM graduate, freelancer based in Manchester. “...One of the most sought after trumpet stars around...”
Trumpeter
Bolton
Public liability insurance of £10 million
Verified profile

Born in Salford in 1989, Mark was brought up in a musical family and began his musical career with Astley Youth Band at the age of six and went on to play solo cornet with Bolton Youth Brass Band. He later took up the saxophone, piano and also began to pursue his talent for singing. He secured a place in the National Children’s Brass Band of Great Britain, and the Halle Youth Choir under the direction of James Burton who became a huge influence to him. Mark then went on to join the National Youth Brass Band of Great Britain on principal soprano cornet, and also made history by becoming the youngest person ever to join the Halle Choir at the age of 16. At the start of his A Levels he gained a place at the Junior Royal Northern College of Music to study cornet with Tracey Redfern and voice with Jeffrey Lawton. Whilst at the Junior RNCM he made the decision to apply for university playing the trumpet and picked up the instrument for the first time during his first term at the Junior RNCM. With the help of Tracey Redfern he quickly progressed and successfully secured a place to study at the RNCM with a scholarship on trumpet. During this time Mark was appointed as the soprano cornet player with the Fairey Band under the direction of Philip Chalk, and has enjoyed his time there immensely, being involved in various concerts, contests and trips abroad. Mark is also a keen composer, arranger and conductor. During his time at the Junior RNCM Mark performed with the Brass Ensemble and Jazz Band, appearing both as a trumpet and vocal soloist. After his first two years of study at the RNCM, being heavily involved in projects and concerts, he was accepted onto the ERASMUS scheme in 2010 to study at the Oslo Musikkhøgskole in Norway for his third year of studies. Now back in England having studied with such people as Jan Fredrik Christiansen and Ole Edvard Antonsen, Mark has graduated from the RNCM with first class honours. Working hard as a soloist, chamber musician, jazz musician and all round performer, Mark is keen to take on anything that comes his way with a passion. Taking part in all matter of ensembles ranging from the Symphony Orchestra and Big Band, appearing in Masterclasses with people such as Håkan Hadenberger, Thierry Caens and Rex Richardson, and most recently being accepted onto the access scheme with the world famous Hallé Orchestra, Mark is always striving to be the best musician he can hope to be, in as many aspects as possible.

Mark is an excellent trumpeter who was able to fill in for our band at short notice and help make a great evening. Many thanks

Mark led the beer band for our Oktoberfest at Haigh Hall, and it made the whole evening run so much easier! He was professional and easy-going, and the music was great too!

Moira B, 2 years ago

Mark - Thank you so much for playing at my daughter's wedding! We can't believe how easily you were able to do exactly what we wanted, and more!! Thank you for making it all run smooth, and thank you for your fantastic playing! 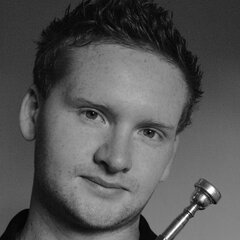 A superbly talented and versatile trumpeter. It's always a pleasure to perform with Mark!

A superbly gifted and versatile trumpeter. It's always a pleasure to perform with Mark.