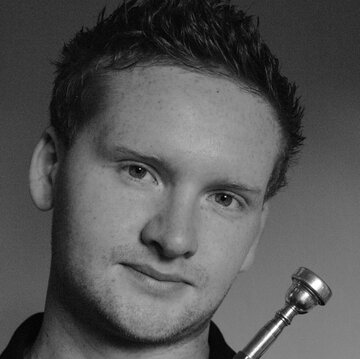 I'm a professional trumpeter, composer and arranger. I'm a graduate of the RNCM with 10 years of professional playing experience

Joel Cooper is a professional trumpeter. He graduated from the Royal Northern College of Music in 2007 and since then has built up an impressive portfolio career. He has performed with top International orchestras, including the BBC Philharmonic Orchestra, the Royal Liverpool Philharmonic Orchestra, the Halle, Manchester Camerata and Opera North. Outside of Britain, he has worked with the Australian National Ballet, the Australian Urban Circus, Lyon Opera Orchestra and has toured with numerous show companies. As a soloist, Joel is very comfortable with performing on a selection of instruments, including the Piccolo Trumpet, D Trumpet, Bb Trumpet, Cornet and Flugel-horn. This allows for a very varied and interesting recital. He has given recitals in many Cathedrals and Churches nationwide, as well as in Concert Halls and at Arts Centres. Highlights of his solo career include:- Playing a fanfare for the arrival of her Majesty the Queen at Whitworth Hall, (a Manchester University event) in 2008. A performance of Malcolm Arnold's 'Fantasy for Trumpet' at the 'Conservatoire National Superieur de la Music et Danse' in Lyon, France. Appearing as a soloist in 'King Cotton' (a new musical commissioned by the Southbank Centre in 2007). A performance of 'The Trumpet Shall Sound' (from Handel's 'Messiah'), at Liverpool Anglican Cathedral (Dec 2013) and Liverpool Metropolitan Cathedral (Dec 2014) Recording Charpentier's 'Te Deum' for 'The Christmas Service' on BBC Radio 4, (broadcast live on Christmas morning 2013). Performing with Inspired Brass as part of a live broadcast from Chester Cathedral for the Easter Service 2015, BBC Radio 4. Joel teamed up with Bath Abbey’s Organist, Shean Bowers to give recitals in Cathedrals and Churches, They have recently recorded their debut album, ‘Jubilation’. Joel also hopes to release a third Christmas album with his Brass Quintet, Inspired Brass, donating profits from CD sales to 'The Christie NHS Foundation Trust', Manchester. Joel is the Trumpet/ Cornet and Bugle Teacher at the Royal Hospital School, Holbrook, Ipswich.