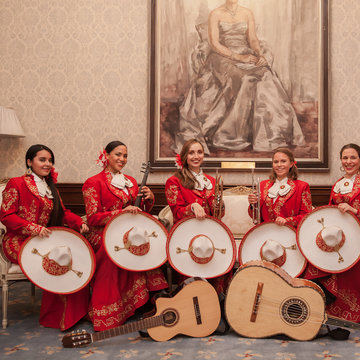 Hailing from Mexico, Cuba, Colombia, and the U.K this unique band was formed in 2013 out of the desire to shatter stereotypes. In 2019 they played for Salma Hayek's private birthday party and then also for pop singer Sophie Ellis Bextor. In 2020 they were the featured band in the virtual International Women’s Mariachi Festival based in L.A, where they were part of a 3-group line up along with Grammy award winning Mariachi Divas and Mariachi Reyna de Los Angeles. They performed in person at the festival in Los Angeles, California in 2018 where they received a standing ovation and played live on both Univision and Telemundo TV channels, and were featured in countless publications. Their recent music releases have been hugely popular, they were interviewed by Cerys Matthews from BBC 6 music in March 2021 and again for radio 4 in May 2022. They have made special appearances for both the U.S and Mexican embassies, the British Museum, the Victoria & Albert museum, Disney, the British Library, and the legendary Camden Roundhouse venue amongst many, and played at countless festivals. They are booked to play at Glastonbury Billy Bragg stage and Womad BBC Charlie Gillet stage this year. Not only is each member a fantastic instrumentalist in her own right, but there are no less than three lead vocalists in the group, all with the vocal power and clarity expected in any serious mariachi band. Officially a 7-piece band, they can expand or play in smaller groups if required. With tight vocal harmonies and years of experience on their instruments and in the mariachi style, they also look great! They are available to play serenades as per the Mexican tradition, as well as festivals, cultural events and absolutely any kind of celebration, including funerals. All of the mariachi classics are included in their repertoire, with some beautiful arrangements of well-known songs including classics in English arranged in an authentic mariachi style, which makes the band truly versatile. Their repertoire ranges from lively and joyous, danceable, to romantic, and even heartbroken. They have 4 different styles of mariachi outfits made to measure in Mexico, including the 'Adelitas' outfits. Instruments in the band are Guitar, Vihuela (small Mexican percussive guitar, Guitarron (a very large Mexican bass guitar, played in octaves to double the volume of the sound), 2 trumpets and 2 violins. They can travel anywhere and are very happy to learn any favourite song for a special occasion. You can happily hire them completely acoustically or they can also provide amplification if needed.

We certainly do! We can go as large as an 8 piece all female mariachi band or even larger with some males thrown in, right down to a duo if your budget is on the low side. Although a duo and a trio still look and sound good, neither are considered authentic in mariachi, where at least 4 musicians is the recommended minimum. The more the better!

We always try to be flexible but please do communicate any changes with us in good time, so that we can accommodate your requests.

Of course, no problem!

We usually arrive 1 hour before the performance time, which gives plenty of time both to set up and go through any last minute details.

We are experts at roaming while performing!

Of course. We have several beautiful mariachi outfits handmade for us in Mexico, as well as our 'Adelitas' outfit. Please see our pictures and let us know if you have a preference.

Absolutely. We have small portable amplifiers we can wear while playing, and can also bring a small PA if needed.

Yes we can. Please give us as much time as possible to write arrangements and organise rehearsals etc.

Our authenticity, professionalism, talent and charisma🙂

Camden Roundhouse, Earls Court, The British Museum, the V&A museum, a Disney premiere, the Bloomsbury Ballroom for the Mexican Embassy, the U.S embassy, many festivals and private events!

The Women's Mariachi Festival in L.A, California, where we received a standing ovation, were interviewed and played live on several TV channels. And of course Salma Hayek's private birthday party in a London members club.

All prices include:All inclusive of outfits, small portable amplification, PLI
NEW!Virtual services
Personalised Music Message
Book me to create a unique music video for you to send to a friend as a gift. This could be a birthday message, first dance song for a wedding anniversary, or just your friend's favourite song to cheer them up.
£15
Mariachi Las Adelitas UK

4.9 out of 5
18 verified reviews
Satisfaction

Fantastic band, thank you so much ladies! We have received some fantastic comments from our guests and hope to book again!

Las Adelitas were excellent and gave an amazing and powerful performance! Our guests were so happy and we all enjoyed a great time. Las Adelitas came prepared and looked wonderful in their beautiful Mariachi suits to play outdoors in a public park for our wedding. We would have preferred to have a phone call with them to go through details before the event, but we ended up communicating via text message which worked out fine. Thank you Adelitas!!

It was great. All guests were excited. unfortunately the organizers did not have enough time and there were still other events before the wedding was over. This did not allow for more time for their performance. However, all was great and we ended very satisfied.

The most incredible performers. We already want to book them again! Thank you so much to Mariachi Las Adelitas x

AZ
Anel Z
3 years ago, for a Private event in Bishop's Stortford CM23

Excellent musicians and entertainers :) I have had the pleasure of listening to them a few times and finally got the chance to hire them. Everyone loved them! :) Keep up the good work!

SC
Steve C
3 years ago, for a Bar / Club / Venue event in Hastings

We went to see Mariachi Las Adelitas in Hastings (Fat Tuesday Festival) after watching one Youtube video and they blew me (and everyone that saw them) away!! We followed them to three venues (in favour of other bands we'd gone to see) as the experience was too good to miss out on. The costumes, the charming introductions and the joie de vivre of their performances were all first class as were there choice of songs. I can't recommend them enough (even if you have no knowledge or interest in Mariachi) as they are the most refreshing and enjoyable band I have seen in some time. Can't wait to see them again.