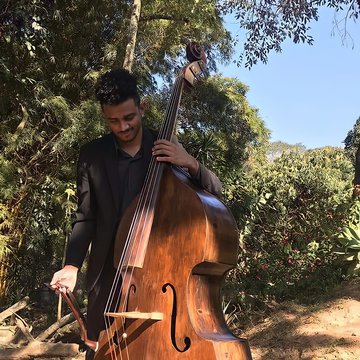 Doublebassist based in Manchester UK. Weddings, concerts, shows, recordings etc. I promise bring to your events the best experience ever.
3 of 3 photos
Bass Guitarist
Manchester

Marcelo Henrique Nunes Rodrigues is a double bassist, who is currently studying at the Royal Northern College of Music. In 2021 Marcelo was extremely proud to be awarded a scholarship to study at the College. Marcelo was born in Codó, a small city in the northeast of Brazil. When he was seven years old, the family moved to São Paulo in search of better prospects. Marcelo showed an early interest in music. He started taking drum lessons at church, but it was love at first sight when he was introduced to the double bass, through a social project organised by the Instituto GPA, in Osasco, São Paulo. Marcelo performed with the Youth Orchestra of São Paulo State, which is considered the best youth orchestra in Latin America for three years. During this time, he had the opportunity to share the stage with brilliant musicians such as Antônio Menezes, and conductors such as Benjamin Zander, Marcelo Lehninger, Fábio Mechetti Cláudio Cruz among other great names. Marcelo has also performed on the international stage in countries such as the United States of America, France and Argentina and has played at famous venues such as Sala São Paulo, Theatro Municipal de São Paulo, and Crowne Centre amongst others. Passionate about music, Marcelo enjoys a wide range of music styles. Jazz fascinates him, as well as Brazilian popular music, Afro-Caribbean, and Afro-Latino music. Marcelo is also deeply interested in the arts, history and geography and is a keen footballer and basket-ball player.

Fernando A, 2 years ago

Incredible quality of music and what an Amazing professional!