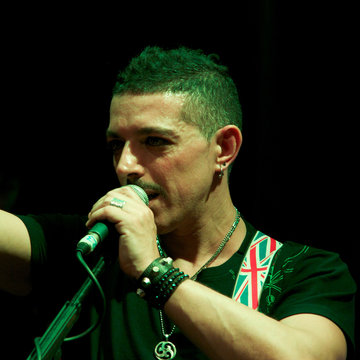 LUX MACLEOD Singer, guitarist, bassist, songwriter, producer, guitar teacher, session player and sound engineer for small venues. Born 29th August 1972 in Cagliari, Sardinia-Italy. Since an early age, he showed a huge interest in arts, especially in music. His first approach to music was a plastic toy guitar, received as a Christmas present. Aged 6 he started singing in Christian Community Ceremonies. At 11 years old he started to study electric guitar as a self-taught musician. At 15 he had already written plenty of songs and at 17 he founded his first band called S.M.Aces ( Sweet Metal Aces). The band started very soon to perform at some local Bars and Festivals. At 19 he moved to Padova, and eventually took guitar lessons with a private teacher, attending a jazz/fusion course. Meanwhile, he recorded a Mini-Cd with a band called Tiraburiana, an Indie Rock band. He then moved to Milan where, besides the usual gigs as a singer and guitarist, he also played the bass guitar with an Ac/Dc tribute band called Dirty Deeds. At the same time, he worked on his new original project that, unfortunately, for personal matters, was never completed. In 2004 he travelled back to his homeland Sardinia where he got the chance to collaborate with several cover bands as a guitar player and singer, besides being a one-man-show. He started a 4 years long collaboration as a guitar player and backing vocalist with a well known Sardinian band called Tamurita. The collaboration ended in 2012 and was quite profitable. With Tamurita he recorded a studio album and played hundreds of live gigs on big stages across Italy, supporting important international acts like Gogol Bordello. In 2006 he studied modern singing techniques for about a year, and in 2012 he approached the EVT ( Estill voice training), a revolutionary voice training method that has dramatically changed his voice for the better. In 2008 while playing with Tamurita, he started a cover band called La Mouche. La Mouche played thousands of gigs for different kinds of events and organisations during their 8 years' long activity. In 2011 he went back to songwriting and created a brand new project called Life Under X in which is putting all his efforts and energy. Life Under X released its very first self-produced single in summer of 2012. He is now in the process of writing new material which will be eventually recorded. Lux is also interested in acting and has acted in little shows, short movies and videoclips. He is now based in London, performing as a solo act, with the Double Shot duo, and as a dep with many bands.

As a music aficionada and a hardened music critic at the same time, I must admit he did a hell of a great job. Non only did he effortlessly played three long sets, he also interacted with the dancing masses to ensure they were having a good time. And I can assure you we were. Can't wiai for the next one