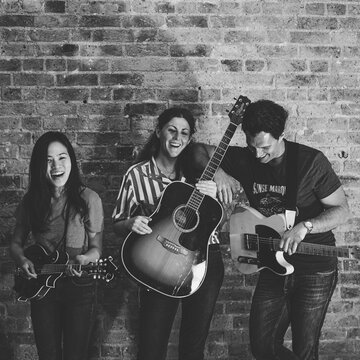 We pick, we sing, and we eat lunch. A special bluegrass/country band based in London. Available dinner times, too.

Lunch Special is a London-based Country and Bluegrass band. Members Neala Hickey, Vivian Li, and Luca Serino have roots spreading across three continents. In 2016, the three met at a bluegrass picking in London pub, where they bonded over a passion for stringed instruments, harmony singing, murder ballads, chicken, beer, and all things American. They play and sing traditional bluegrass classics, lesser known old songs, and also their own originals. While they take inspiration from Appalachian music, bluegrass, and country, their diverse musical backgrounds bring together something that is their own sound. The band has showcased for the Americana Music Association, played major festivals and they have just recorded their debut EP, which will be coming out in 2019.

Instrumentals:
Big Sciota
Temperance Reel
Whiskey before breakfast
Billy in the low ground
Cherokee Shuffle
Blackberry Blossom
St. Anne’s Reel
Kitchen Girl
Jerusalem Ridge
Old Grimes
Red Haired Boy
Salt Creek
Songs:
I’ve endured
The one I love is gone
Won’t you come and sing for me
If I should wander back tonight
Sitting along in the moonlight
Blackest Crow
Speed of the sound of loneliness
Rain and Snow
Can’t you hear me calling
On and on
Darling Corey
Deep river blues
Ain’t no ash will burn
Hop High
Do I ever cross your mind
Trouble in mind
Railroad Bill
Freight Train Boogie
Where the soul of man never dies
Standing by the bedside of a neighbor
Sophronie
Lazy John
Customer questions

Yes. We can play as a trio, or as a quartet with a double bass.

We usually take half an hour to an hour to set up, and we usually arrive an hour before performance time.

Our vocal harmonies and our energy! It's hard to hear our music and not start tapping your toes!

Lunch Special played for our Anniversary and they were fantastic. They were really flexible and easy to work with. The music got everyone dancing and it was perfect for the occasion.

Thank you so much for playing at our wedding! We especially loved the vocal harmonies. We loved the music and so did our guests.