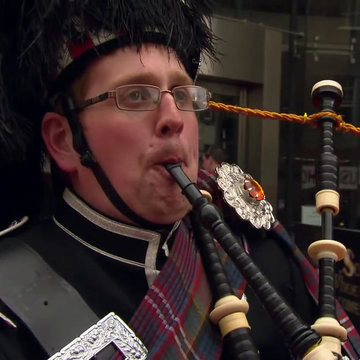 One of Scotland's leading contemporary bagpipers and musicians from Brave, Call the Midwife and How to Train Your Dragon.

Lorne MacDougall is one of Scotland's leading innovative traditional musicians performing on a range of bagpipes and whistles. Recent times have seen him achieve an MG Alba Scots Trad Music Awards Instrumentalist of the Year Nomination and previously placed 3 times in the BBC Radio Scotland Young Traditional Musician of the Year Final. He has an Honours Degree in Scottish Music specialising in Bagpipes. He is known for seamlessly integrating his sounds into soundtracks with highlighted credits ranging from movies like Disney Pixar’s Brave and DreamWorks’ How to Train Your Dragon series to television shows like Doctor Who and Thunderbirds Are Go. He arranged and recorded the pipes for the long-running Scottish sitcom Still Game for The Final Farewell show at the SSE Hydro in Glasgow. His piping features prominently in the 2019 Christmas special of the popular BBC drama Call the Midwife. His musical talents have brought the attention of such luminaries as Academy Award Nominated composer John Powell describing him as being “clearly a hybrid who really does understand the rest of the musical world from the point of view of a being a piper”. Other soundtrack contributions include Whisky Galore and Victoria and Abdul. He has since worked on various other projects with these composers including, most recently, Patrick Doyle’s highly praised Scottish Overture premiered at Celtic Connections in January 2019. He soloed at to a sold-out Royal Albert Hall for the Doctor Who 50th Anniversary Prom. As a recording artist, he has recorded alongside a wide range of artists from Scottish legends Billy Connoly and BA Robertson as well as more recent stars like John Barrowman and two albums with Susan Boyle. He also provided the pipes and whistle to the 2014 Commonwealth Games Opening Performance “Welcome to Glasgow” by Steve Anderson and Cliff Masterson. More global appearances include representing Scotland in Disney’s It’s a Small World World for it’s 50th Anniversary video at Disney World and impressing Richard M Sherman, one of the song’s original composers. In 2017 he recorded on D Imman's soundtrack of the successful Tamil film Bogan in the song Senthoora reaching over one million YouTube views in just days. He makes regular on-screen appearances ranging from talent shows like Strictly Come Dancing, The X Factor and Come Dine with Me to crime dramas such as BBC 1’s Shetland and is no stranger to presenting being behind the online radio show PlanetPipe and a regular guest on BBC Radio Scotland. His career has covered the wide spectrum of Scottish music from 5 years touring the USA and Europe with the established world-renowned, pioneering traditional folk band the Tannahill Weavers to having had various roles on on all releases from the masters of modern bagrock, the Red Hot Chilli Pipers, being a driving force behind their music from inception. He produced one of their most successful pieces to date with "343 The Fallen" - a single released to commemorate the 15th anniversary of the 9/11 attacks in the USA. As a composer, his tunes have been recorded by some of the folk scene’s greatest artists as well as taken on board as the theme tune to Sky Sports’ SPL Football coverage. After releasing his highly acclaimed debut album Hello World in 2010 he is currently working on a follow up in 2020.

That should usually be fine as I would normally have booked the whole day for one client.

This would be unusual for a piper!

I usually take 30 mins to set up. If the event is a longer journey from Glasgow I may travel in plain clothes and may require an extra 15 mins to change.

Yes - the set list provided is extremely basic. I literally know thousands of tunes, so just ask if you'd like me to play something else.

Absolutely no problem at all and at no extra fee, unless it's a complicated piece.

I'm happy to arrange and learn new pieces. They also love chatting about some of the interesting projects I've been in solved with.

Various venues throughout the world.

Doctor Who at the Proms probably, but I regularly perform to thousands at festivals and events.

Standard Prices
All prices include:Song choices, phone calls/Skype to discuss.
Packages
Bagpipe Workshop
Teach adults or children the basics of the bagpipes, and even let them have a shot of a demo set of pipes!
£150
Wedding ceremony
This includes music before the service begins, music during the signing of the register, and music as guests leave.
£200
Tune Composition and Performance
I'll give you one of my tunes, with a title you would like and performed at your event. Also includes framed copy of music for the tune.
£200

...clearly a hybrid who really does understand the rest of the musical world from the point of view of being a piper.

…the synthesis of where pipers in the traditional scene have been taking the music for the last twenty years. It’s a very good place!