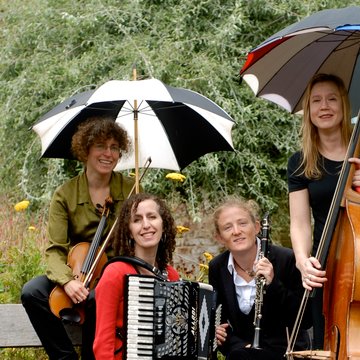 LKQ brings you klezmer at its most beguiling and seductive. The subtleties of the original tradition, combined with a kick-the-chairs-over ability to party. Formed in 2009, the band is popular throughout the UK, has performed for dozens of celebrations and had six sell-out tours in Australia. International performances include Brazil, Germany, Holland, Latvia, New Zealand, Sweden and Switzerland, and the group has broadcast live on BBC Radio 3 & 6, BBC TV.

Our line-up is generally 4-piece: violin/dance caller, clarinet, accordion/guitar, double bass/cello. We can also arrange for a bigger band.

We are generally happy to cater for an hour's variance either side of the contracted times, but this may not be possible at short notice or during busy times of year.

We can provide a playlist or plug in your cued-up choice of tunes into our PA. If you need to use our PA after the final set, we'd need to agree this in advance, and there would be an extra charge.

We need about an hour to set up if we're using a sound system, and recommend that we finish setting up around half an hour before your guests arrive. If it's an acoustic set, we can arrive and play within half an hour or so.

When playing acoustically we're happy to move from place to place - although with the double bass, it tends not to be strolling as such!

We are experienced at providing appropriate tunes for background music, dancing, chuppah etc. but are happy to discuss particular requests.

Our PA is included in the quote.

We are happy for you to ask us for up to 3 requests outside our usual set list. There is a fee of £30 per tune to take account of transcribing and learning new material.

Amazing group, great music and incredibly friendly. 10/10 for experience. We really enjoyed having you at our event and you really made our evening, thank you!

The Klezmer quartet really made our wedding special.

Everyone loved you, great feedback

A fantastic night with great comments from lots of audience members

We just wanted to thank you so much for playing at our wedding. It was indeed a joy for us to have you there. I think many people enjoyed your fabulous music and playing.

Exuberant yet cultured playing... no shortage of dynamism here

Klezmer bands in the UK