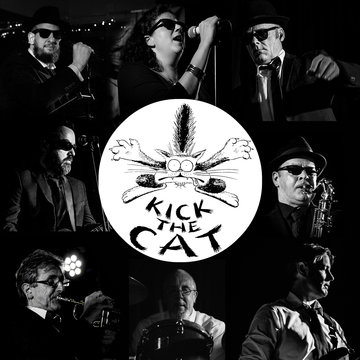 About Kick The Cat

Kick The Cat are an eight-piece rhythm & blues and soul revue showband consisting of drums, bass, guitar, keyboards, trumpet, tenor sax, female vocal and male lead vocal, and are widely known for their tribute to the Blues Brothers. The band was established in January 1996 and gigs regularly around the south-west region, reaching the area finals of the 'Battle of the Bands' competition in 1998 as well as performing on TV for the Children In Need charity in 1999. Since then they have built up a following from their many public and private performances. Other styles included in their set are Motown, funk, disco and a selection of current chart favourites, putting on an energetic show that's guaranteed to make you want to get up and dance. With such a wide variety of songs in their repertoire they are the ideal band for private functions such as weddings and birthdays and are also available for corporate events (past clients have included John Lewis, Safeway, NHS, Babcock International, The Webbington Hotel and the Theatre Royal Bath). With over 20 years experience, Kick The Cat are the band you can trust with your special occasion.

Yes, unless there is an illness close to the performance. We then have a number of tried and tested singers who have performed with us before that we can call on.

No. We want all our customers to receive the same high level of performance that can only be provided with our full 8 piece band.

No worries, just get in touch with us as soon as you can and we can discuss the various options to make sure it works for you.

We can provide and play music to be used as background music which is suitable for most of our events…however, it is not a DJ service. If you have your own playlist on an iPod/mp3 player then feel free to bring it along and we can plug it into our sound system.

1.5-2 hours….depending on what the access is like to the performance area from where our vehicles can load in.

We are happy for you to pick your favourite songs from our comprehensive song list(…or exclude your least favourite!), and we will endeavour to get as many of them into the set.

We want to do your favourite songs justice and so unfortunately due to the time restraints of getting an 8 piece band together for rehearsals etc we do not take requests, besides the ones that are already on our set list.
Kick The Cat

Reply from Kick The Cat

Thank you so much Lisa for inviting us along to play at your Dad’s party. :)

LD
Lilly D
4 years ago, for a Wedding in Kentisbeare Village Hall

We’d like to say a huge thank you to you and the band for making our wedding reception unforgettable. Your set was our favourite part of the night, I wish we could relive it again and again! So many of our guests have commented on how great you guys were and how nearly every single person in the hall was dancing. The set list was fantastic, so many great funk and soul songs! It had everyone up dancing and singing along. The lighting looked amazing too! It really made the evening so special. Thanks for being so communicative all the way through the planning process too. We couldn’t have wished for more. Kick The Cat fans for life now! Thanks again so much, Lilly & Jamie

MS
Mike S
4 years ago, for a Wedding in St Bonaventure's Church Hall

Kick the Cat were FAB. We booked them for our wedding reception and they were an absolute highlight. The dance floor was never empty as they entertained our 170 guests all evening with classic Blues Brothers and Soul. Not only did they provide fabulous music and entertainment but they were highly professional, brought all their own kit and were very easy to communicate with in the run up to the day. We would highly recommend them- we’ve even got guests asking to book them for their wedding. Thank you Kick the Cat for making our wedding an absolute banger!