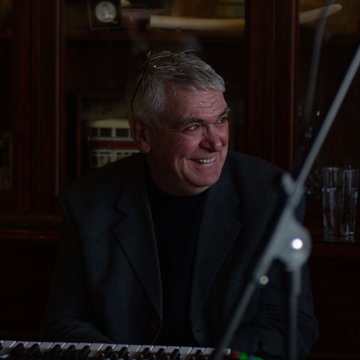 Check availability and get a free quote now - no commitment to book
From£175
About Kevin
Song list
Reviews
Home page
Kevin Lovelady
Like Kevin?

Keyboardist
Liverpool
Public liability insurance of £10 million
Kevin has been playing on an amateur basis for over 30 years, mainly piano and keyboards but also now vibraphone
Performance details
I can perform outdoors
I have a car I can use to travel to gigs
I require car parking close to venues
I have my own portable piano/keyboard
I own a PA system
Musicianship
Genres:
Jazz, Jazz fusion, Latin jazz, Funk, Funk rock, R&B
See all genres
Instruments:
Keyboard, Vibraphone
See all instruments
Event types:
Concert, Bar / Club / Venue event
See all event types
Other skills:
Composer, Lyricist, Songwriter, Musicologist
See all skills

West Kirby Arts Centre’s jazz club night is going from strength to strength and last Friday they hosted Merseyside-based Zingaro band for the first time in what is sure to be a regular booking. Although without a singer for this event, they excelled as a jazz four-piece with many pieces showcasing the incredible Chris Jones on both upright and guitar bass. At several points he took centre stage and delighted the audience with his inventive - and often surprising - solos. The musical chemistry between Jones and excellent drummer Paul Keelan is at the heart of the Zingaro sound as they moved effortlessly from bop, through classic 70s fusion to acid jazz and beyond. Guitarist Brian McCusker and keyboardist Kev Lovelady – whilst never loud or flashy – were inventive throughout and showed they could deliver tasty solos of their own when called upon. Early in the first set the band showed what they could do with a clever reworking of Take Five and then they really began to cook in the second set, after tearing through Hancock’s Cantaloupe Island they peaked with an extended version of Liston Smith’s Expansions. When the band had left the stage, Mono-Tone DJs played some classic jazz and funk on their vintage sound system to round off a very enjoyable evening. Plans are already afoot for a return gig: stay tuned.

Verified
Will W, 1 year ago

Zingaro provided the live element for one of my Planetary Jazz Foundation evenings at the Workshop in north Liverpool in 2017. Kev (the keyboards player) & I had discussed the basic structure of the night prior to the gig and their acid jazz, latin and soul jazz interpretations of some classic jazz & funk grooves perfectly complemented the sounds I was playing. The level of musicianship is superb and they work brilliantly off each other. I saw them again at another gig in 2018 and they did not disappoint again. I have no hesitation in recommending them and hope to work with them again at some point.