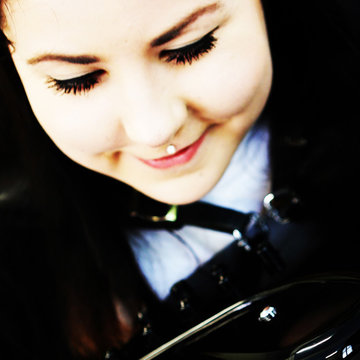 Check availability and get a free quote now - no commitment to book
From£180
Watch & Listen
About Katariina
Home page
Katariina Ahjoniemi
Like Katariina?
Watch & Listen
1 of 1 video

Katariina Ahjoniemi is one of the leading young accordionists from Finland. With a versatile repertoire she is able to perform anywhere.
Accordionist
London

Katariina Ahjoniemi started to play accordion at the age of 4 and in 2002 started her studies at the Sibelius-Academys youth department with Heidi Velamo and Marjut Tynkkynen. In 2013 she began her studies at the Royal Academy of Music with professor Owen Murray. Katariina has successfully participated in competitions around the world including Germany, Italy, Lithuania and Croatia. She has won several times "Minä soitan harmonikkaa"-competitions in Finland during the years 1998-2007. She has won the Silver Accordion competition in 2000. She won the most prestigious competition in Finland 2009 the Golden Accordion-competition. Then 2010 She won the Scandinavian Roland Accordion competition and then later on in the year represented Scandinavia at the world championship held in Rome with great success. In the year 2011 She won the very famous Okud Istra-competition held in Croatia with her trio and got the most highest points in the history of the competition. At the same time she also won 1st prize in a different category, being a part of the Finnish Youth Accordion Ensemble. Katariina has had her own concerts around various European countries aswell as in Finland and participated in many masterclasses with Mika Väyrynen, Mikko Luoma, Hugo Noth, Mie Miki, Margit Kern, Claudio Jacomucci, and Lars Holm. Katariina has participated a lot of music camps as a teacher of accordion and performs actively in different kinds of ensembles and chamber orchestras aswell as a soloist.