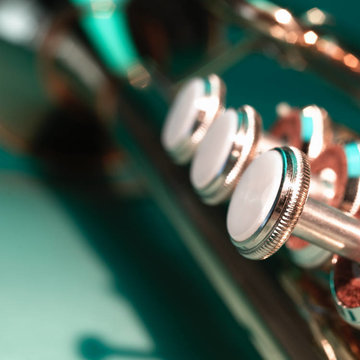 Junction 4 Big Band was formed to capture the very best of this genre of music whilst taking a broad minded approach to the repertoire to include not only some of the greats, but also tunes that perhaps don’t get heard too often in big band music. Junction 4 Big Band was formed in 2011 and consists of 18 regular musicians who enjoy playing big band, swing and jazz music from the 30’s to the music of today. The sound of the band in full swing is something to behold – we hope you will be able to come to one of our events to listen for yourself. Band leader David Cunningham’s musical upbringing was initially brass band, then as a military musician. It was whilst in the army he first played trad jazz then help set up and run the band’s own big band. Junction 4 Big Band has a few other ex-military musicians as well as amateurs and professional musicians; one member plays with the Catherine Jenkins Orchestra as well as the National Symphony Orchestra. The band plays music from all the jazz greats – Buddy Rich, Basie, Ellington and Miller. The love of this music is shared amongst all the band members. Since it’s formation in 2011 most of the band are still the original members from the first rehearsal. Those who have had to leave only did so due to moving away from the area or due to work commitments. The standard of the band is clear testament to the loyalty of the band members who eagerly come to each rehearsal trying to personally improve their playing, but more so, the overal performance of the band when performing. There is a waiting list of players who are keen to join the band should a vacancy occur, however, if you play to a high standard and would like to sit in on one of the regular rehearsals please contact David. If your of the high standard the band requires you will be added to the dep list or considered for a permanant vacancy when one occurs. The band usually rehearse on the 1st and 3rd Sundays each month, at a Day Centre near Farnham, Surrey and Crookham Street Social Club, Fleet. Rehearsals are from 2:00 – 5:00. Please contact David if you would like to hear the band in rehearsal if your are considering hiring the band.

Feeling Good
The final count down
Hello
Me & Mrs Jones

AS
Anne S
3 years ago, for a Charity event in Ballantyne Rd

On Saturday 26 October 2019 the Junction 4 Big Band played for our Ballroom and Latin Social Dance at Shuffles Dance School. It is difficult to put into words the elation we all felt, dancing to music being created live, rather than the usual CDs. The band were perfect for our event, playing two 45-min sets of strict tempo music with precision and panache. To have a 17-piece band, plus their talented vocalist, was a dream come true and we are already planning to repeat the event in the New Year. The evening certainly had the WOW factor! Anne Smith

SOUNDS of BUBLÉ is a must-see for any Michael Bublé fan and big band lover. All of the classic Michael Bublé numbers will be performed, such as Cry Me a River, Feeling Good, Haven't Met You Yet and Home, to name just a few. Matt Fisher's uncanny vocals and mannerisms mirror Bublé himself, and along with the tight and crisp sounds of the huge 17 piece Junction 4 Big Band, you will feel you are actually watching a Michael Bublé concert