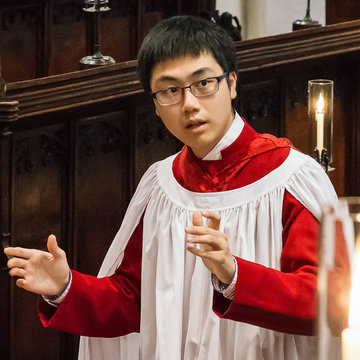 Jordan Wong was the Dr John Birch Organ Scholar of All Saints Margaret Street, and is currently converting to law. Prior to that, he was the Organ Scholar of Jesus College, Cambridge, where he read Classics, holding the Prince Philip Scholarship. In his time, he enjoyed extensive recording and international touring projects, with destinations such as South Africa, Beijing, and Venice, on top of his usual eight rehearsals and services a week during term. Originally from Hong Kong, Jordan was the Malcolmson Organ Scholar at Monmouth School, studying with David Lawson. There he was involved in premieres of music composed for the School, by Colin Mawby and Alan Bullard. Moreover, Jordan was a répétiteur for the School’s Choral Society, and for the Cambridge University Opera Society. He is an Associate of the Royal College of Organists, and has performed in various venues in the UK and abroad. He had studied with Gordon Stewart and Ann Elise Smoot, and David Briggs for improvisation. Besides the organ, Jordan has performed Tchaikovsky’s Piano Concerto No. 1 with the Wye Sinfonia at the Wyastone Concert Hall, and Mozart’s Piano Concerto No. 10 for two pianos with the Jesus College Music Society orchestra, of which he was a Junior Co-President. In 2018, he also played continuo for Bach’s Brandenburg Concerto No. 3 and St John Passion. Jordan was also involved in the percussion section of various ensembles at Monmouth and Cambridge, including the orchestra for the triennial Cambridge Greek Play in 2016.

Please let me know as soon as possible.

Standard Prices
All prices include:Consultation, travel costs NOTE: exact price depends on the nature of the performance needed, as well as the music involved.
NEW!Virtual services
Lesson
Lesson in piano, music theory, or tutor up to Music A-level. Price dependent on level of tuition.
£40

(On Byrd | Britten, album recorded with the Choir of Jesus College, Cambridge) ★★★★★

(On Praise My Soul, album recorded with the Choir of Jesus College, Cambridge): 8/10 https://www.crossrhythms.co.uk/products/Choir_of_Jesus_College_Cambridge_Richard_Pinel/Praise_My_Soul/173694/