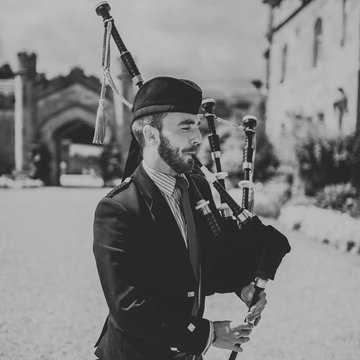 Check availability and get a free quote now - no commitment to book
From£180
Watch & Listen
About Jonathan
Reviews
Home page
Jonathan Graham
Like Jonathan?
Watch & Listen
1 of 1 video
Piping the Bridal Car in

Grade 1 bagpiper Jonathan Graham has played since the age of 10, his raw talent gaining him numerous awards as a solo piper. He developed an interest in bagpipes from an early age through hearing his Grandfather play on a regular basis. Jonathan is a piping tutor and has many students in Glasgow, as well as foreign students in Holland, France, Germany and the US which he teaches via Skype. He is a former tutor at the world-renowned National Piping Centre and held the post of Evening Class Coordinator there. He graduated in 2012 with a first class honours degree in Scottish music at the Royal Conservatoire of Scotland. He is a successful solo competitive piper and has played in many pipe bands, most recently the prestigious Scottish Power Pipe Band, and has also travelled the world representing Scotland with the National Youth Pipe Band. Aside from the traditional side of piping he participates in many contemporary projects, the main one being the world-famous Red Hot Chilli Pipers, who he travelled to America with recently for a tour. Due to this wealth of experience in all contexts of piping he is often asked to speak to journalists and film crews about Scottish music, history and culture when they visit Scotland. He also has experience judging piping competitions; whether it be solo or bands. For a man of 26, Jonathan has gained much life experience, for example; being invited to perform at New York's Tartan Week celebrations in 2005 & 2011, has appeared on various tv shows including River City, Blue Peter, Flog It, Channel 4s 'T4' and has performed with Susan Boyle on the Paul O'Grady Show. Jonathan has also recorded pipes on many different audio projects including a new version of 'Caledonia' which has just been released. He has been invited to various countries in Europe to perform & teach at schools, has become a regular at the prestigious 'McCrimmon Trophy' piping competition in Lorient, and has also travelled to Mongolia to compete in the 'Gobi Challenge' - a 140mile ultra-marathon across desert terrain- at the age of 17, the youngest person by 10 years to ever do this. Career highlights include travelling all over the world playing for HM Queen Elizabeth II, the Dali Lama, being selected as the lone ‘Hero Piper’ at the Delhi 2010 Commonwealth Games Handover Ceremony performing to 60,000 in the Jawaharlal Nehru Stadium, India televised to 1 billion people, and most recently playing to a televised audience of 1.5 billion at the Glasgow 2014 Commonwealth Games Opening Ceremony alongside celebrities such as Amy MacDonald, Rod Stewart & Susan Boyle.

Jonathan made my dads cremation extra special. I requested a specific song which he played really well, very friendly and professional.

Thank you so much for performing at our wedding. You did a fantastic job and our guests loved it! xx

Jonathan played at a Memorial for my Mum. He was so thoughtful with the music he played and even managed to play Mum's favourite song. Our family would highly recommend this lovely Piper. Thank you Jonathan.

Jonathan piped at my wedding on 23rd July this year. He was absolutely fantastic. He was extremely professional and even posed for some photos. Would definitely recommend.

I arranged for Jonathan to play the pipes at my son's wedding on 17th September 2016. He arrived with plenty of time to welcome guests with his music. He knew exactly where to be and when for the ceremony and entrance for wedding meal. His playing was superb and he was immaculately dressed. Jonathan was happy to pose for photos too and was very courteous to us and our guests. Highly recommend Jonathan as part of your special occasion.

Jonny piped at my wedding a few weeks ago & was amazing! He is excellent & lovely person... can't recommend him enough.

Jonathan piped at my wedding on Saturday and can't thank him enough for a fantastic service! Not only are his skills absolutely breathtaking, he was dressed impeccably in full Scottish regalia, and is just a down right top guy! Everyone loved him. Thank you so much Jonathan!

Jonathan played at our wedding on 21 June this year. He is very good at communicating and pointing you in the right direction regarding the music. He arrived promptly he was very smartly turned out and all in all was very professional. Our guests were most impressed with his playing. We would have absolutely no hesitation in recommending Jonathan to play at whatever occasion you require a piper for. Jonathan certainly helped to make our special day even more special. Thank you Jonathan.