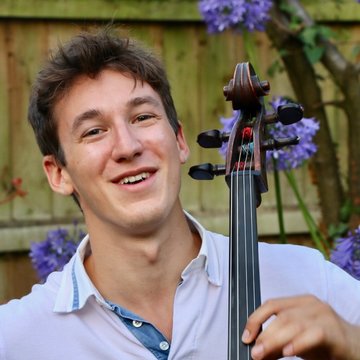 Versatile cellist and pianist based in Cambridge.
3 of 7 photos
Cellist
Cambridge

Joe studied cello, piano and composition at the Royal College of Music as a Tsukanov scholar and recipient of the Wolfson Music Award. During this time he won several competitions, including the Rotary Cambridgeshire Young Musician of the Year, the Cambridge Competitive Music Festival and the Cambridgeshire Young Composer of the Year. He was lucky enough to study with teachers such as Hannah Roberts, Guy Johnston, Alexander Boyarsky, Yoko Ono, Marie-Noelle Kendall and Robert Saxton, as well as participating in masterclasses with Natalie Clein, Yo-Yo Ma and Mark-Anthony Turnage. Joe went on to study music at Oxford University, where he was awarded an academic scholarship and the Fitzgerald Prize, graduating with a Double First. He has performed in a wide range of venues, from Royal Albert Hall and St Paul's Cathedral to Blenheim Palace and Corpus Christi Dining Hall. His compositions have been performed by groups such as the Ligeti Quartet and the Royal Philharmonic Orchestra.

I would strongly recommend Joseph Reynolds, an outstanding musician who performed for our yearly event "Bastille Day" 2019. Joseph was fantastic and could easily play anything that the public asked. He was professional, on time, appropriately dressed and always friendly with everybody. Joseph was an excellent choice and we look forward working him again. Patricia Dalby Director of Alliance Française Cambridge