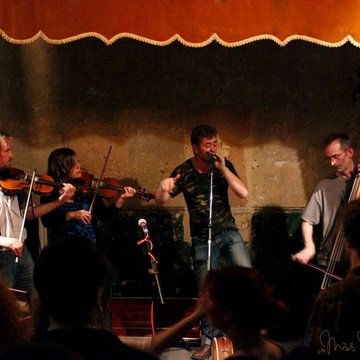 About Jez Hellard & The Djukella Orchestra

Jez Hellard is a singer of potent songs, fine guitarist and simply stunning harmonica player. His band, The Djukella Orchestra, play traditional and contemporary folk music, from jigs, reels and rebel ballads to tango, rhumba and even reggae. Featuring Nye Parsons, one of the most captivating double-bassists you're likely to hear, and some of the finest instrumentalists on the British folk scene, their blend of virtuoso musicianship, witty political comment and a deep repertoire of powerful songs never fails to turn heads. The word Djukella is a common insult in the Balkans, meaning mongrel, and goes some way to describe the mixed provenance both of the music and the musicians themselves. In the past decade Jez and various djukellas have played well over a thousand gigs; from the Glastonbury Festival to the North Country Fair, New York to Taipei, Istanbul to the Iberian Peninsular.

Yes. From solo to 6 piece, we can bring you exactly what you need.

As long as it doesn't interfere with our touring schedule, we always try to be flexible.

Yes, for an extra fee, as long as it fits in with our touring schedule.

It depends on the line-up, and what PA/soundman you have, but normally 15-20 minutes. Never more than an hour.

Yes. If you want us to play acoustic.

We can tailor our set-list to your desires (within reason), but we're not a jukebox. :)

Yes. Within reason. For a small fee.

Our skill, passion, variety, witty banter and way with an audience.

All of the best ones. Too many to list, in too many styles.

Ridiculously enjoyable… an unequivocal thumbs up!

It’s heartening to hear such thoughtful yet deeply felt songs, given the times we live in now. To hear them so well sung, so adroitly arranged and brilliantly performed is a joy.

Jez demonstrated that playing harmonica is a full body experience..With fans across 3 continents, it’s easy to see and hear what all the hullaballoo’s about.

Beautifully crafted and stunningly delivered… a staggering jigsaw of musical invention and a sonorous voice that drags you into every song.

At Purbeck Valley Folk Festival Jez stepped in for someone who couldn’t make their slot. I was there waiting for a band, who, I now can’t remember because as soon as Jez stepped onto the stage he blew us all away. So much so the following afternoon we all headed to the main stage and were rewarded with the full band experience. Jez has such a passion that oozes out when he sings and chats to the audience, Jez and the band were definitely the highlight of our weekend. If they are playing anywhere near you, you must go.

Do not hesitate to book Jez Hellard & The Djukella Orchestra for your venue, not only are you booking a fantastic lively talented group, you are also booking a group who are so easy to get along with. Very professional and yet so easy going it was a real treat to work with them.

Cindy B, 5 years ago

Jez Hellard and The Djukella Orchestra were awesome! With a crazy range of musical styles and very deep chops Jez Hellard ​is a consummate entertainer who makes it fun to learn about history and geography, to ponder the simple wonders of being human (like home canning) and to contemplate importance of current events. A passionate, free styling gypsy vibe combined with virtuoso playing and deep lyrics made for a wonderful house concert experience.

The performance on the Main Stage at this years Wessex Folk Festival of Jez Hellard and the Djukella Orchestra was one of the highlights of the festival. Quite simply the band were excellent. Distinctive and innovative alternative folk produced at full throttle by a tight unit who know how to play their instruments and work an audience. If you get the chance go see the band as it is well worth it