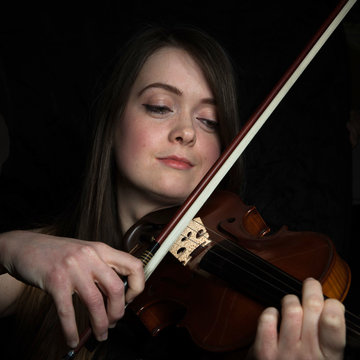 Check availability and get a free quote now - no commitment to book
From£180
About Jess
Reviews
Home page
Jess Townsend
Like Jess?
Watch & Listen

Jess began learning violin at the age of seven and throughout her school life enjoyed taking part in many orchestras, leading her county's orchestral groups and enjoying several years with the National Children's Orchestra. She performed competitively and was a finalist of Worcester Young Musician several times, and was a recipient of the Worcester Competitive Arts Festival's Overall Music Prize. In 2011 she was awarded an entrance scholarship to study under Darragh Morgan at the Royal Welsh College of Music and Drama. In her last year at the college, she was the only string player that year to achieve a full student placement with the Welsh National Opera and rehearsed with them for several projects, and also participated in their side-by-side concert scheme. During this time, she also lead several ensembles including the RWCMD Opera Orchestra & Symphony Orchestra and was nominated for the Ian Stoutzker Prize. She had regular masterclasses with many esteemed musicians including Danny Phillips, Itzhak Rashkovsky & Rachel Podger. Jess was trained as a violin teacher through the Berkshire Maestros teaching internship scheme and splits her time between Bristol where she works for South Gloucestershire Music and Worcestershire, where she now teaches with Severn Arts and the Elgar School of Music. She has previously tutored for Pro Corda, Allcomer Music's CoMA course and local string playing courses. Jess currently studies under WNO's Lowri Porter and regularly freelances with the English Symphony Orchestra for recordings and concerts. She is also a member of the recently formed Kidderminster Festival Orchestra, has freelanced locally for Bristol Ensemble and is an extra for Cardiff Sinfonietta. She has recently guest-lead the northern Cobwebs Orchestra and performed the Tchaikovsky Violin Concerto with them in the spring. She also leads the Welsh Musical Theatre Orchestra. Last year she founded the Severn Duo with her cellist partner Tom McCluskey as a wedding and events chamber ensemble.

We can hardly put into words how much jess and tom the violinist and the cello player made my daughters wedding day. They were absolutely amazing the whole wedding party were blown away by the magic of it all, excellent, professional, truly made the whole day special we will hold the memory of it all forever. We highly recommend jess and tom to anyone thinking of musicians at their event, amazing !!!!