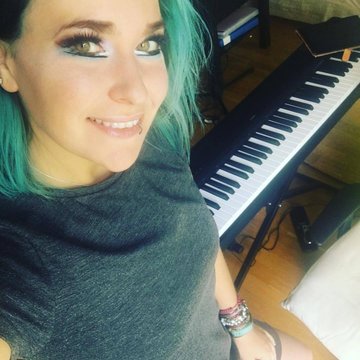 Jen began learning the piano at 10 years old. At university she gained a 1st Class Hons Degree in Music and a Masters in Music Performance, teaching vocal technique both privately and at university level for the two years following. During this time Jen was also performing regularly with wedding bands and of course solo with her piano. This being her passion, she gave up teaching to focus on performing and writing songs, which she still does today. Moving down to London in January 2016, Jen quickly became a resident piano vocalist at one of London's top music venues, the Piano Works. Their sister venue opened in December 2017, where Jen is one of their top performers. Jen also loves playing at other events and is regularly booked for weddings, festivals and charity events.

Love Yourself
Hey Ya
Africa
Heroes (We Could Be)
Crazy In Love
Hard Days Night
You Got the Love
Eight Days A Week
All my loving
Can't buy me love
Kiss Me
Black and Gold
Respect
Heard it Through The Grapevine
Rolling In The Deep
Basket Case
Treasure
I Wish
Stand by Me
Sex is on Fire
Valerie
Release Me
Chasing Cars
Don’t Know Why
Don’t Stop Believing
Superstition
Signed Sealed Delivered
Blame it on The Boogie
Play That Funky Music
American Boy
Crazy
Forget You
Moves Like Jagger
Message In A Bottle
Price Tag
Mr Brightside
Get Lucky
Billie Jean
Stay
Hit me Baby
Just The Two of Us
Girl put your records on
I Bet You Look Good On The Dancefloor
Empire State of Mind
Human
If I Ain’t Got You
Just The Way You Are
Sky Fall
The Importance of Being Idle
One Of Us
Desperaro
I’m So Excited
Beat It
Begging
Your song
Killing Me Softly
Make you feel my love
Grenade
Someone Like You
Wild Ones
Hallelujah
Sunday Morning
Use Somebody
Time after Time
Bridge Over Troubled Water
A Thousand Years
Englishman in New York
Wings
Chandelier
Titanium
Cheap Thrills
Girl On Fire
Firework
Skinny Love
Shining Light
Champagne Supernova
History
Bring Me Down
Wrecking Ball
Id Do Anything For Love
Shining Light
Black Velvet
Total Eclipse Of The Heart
We Don’t Have To Take Our Clothes Off
Let’s Dance
And many more...!!!

Standard Prices
All prices include:PA system (including cable to plug in ipod) Piano Mic All cables and power cables
Jen

5 out of 5
12 verified reviews
Satisfaction

What a voice! Thank you Jen, you were amazing

All my guests loved jen and so did we, highly recommend her in the future, enjoyed every minute and well worth the money ❤️

Jen was absolutely brilliant and I will defiantly be re-booking for future events. Highly recommended!

All of my guests said that Jen was amazing.

CT
Chrissy T
4 years ago, for a Wedding in Back Lane

What can I say about The Singer!! What an amazing voice! She made our wedding ceremony and wedding breakfast more than perfect and more than we could of ever have dreamed it to be! Our friends and family are constantly asking for her details and people wanting to organise events just so they can hear her perform again! Cannot recommend her enough to anyone who is looking for a singer for an event! Thank you Jen for making everything so perfect!

JG
Jessica G
4 years ago, for a Christmas party in 40 Holland Park Ave

Jen was wonderful! Our group had some very unconventional requests, but Jen took the whole afternoon in her stride and nothing was too much trouble. A great range of songs available and absolutely amazing singing voice/pianist. Would highly recommend for any event.

Singers in the UK
Singers in York
Singers in Ripon
Singers in Harrogate
Singers in Leeds
Singers in Bradford
Customer Service
Discover
Company
As seen on
© Encore Technologies, Ltd.
Crafted with bagels and in London