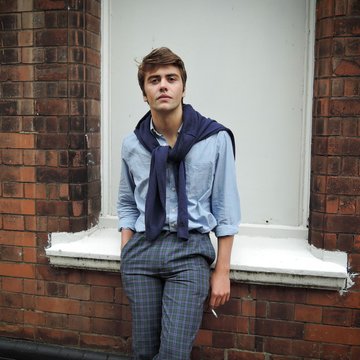 James Larter is a percussionist, drummer, pianist and composer/arranger based in London interested in orchestral, solo music and jazz.
3 of 4 photos
Percussionist
London
Public liability insurance of £10 million

Born in Northampton in 1994, James has since performed as a soloist in Wigmore Hall, Cadogan Hall, Royal Albert Hall, Southbank Centre and The Sage Gateshead. James also plays as an orchestral musician having performed side by side with the London Sinfonietta and the BBC Symphony Orchestra and recently at the London Coliseum with the St Petersburg Ballet Theatre as Principal Timpanist for their 2015 Summer Season. Winning the Peter Morrison Concerto prize and the Percussion Prize, James studied at the Royal College Junior Department with Claire Hasted and the Purcell School with Kevin Hathway, where he also won the Concerto Prize and reached the category finals of the BBC Young Musician competition. Recent prizes include a Yamaha European Scholarship, the Royal Oversea's League Sussex Award and the Norman Butler English Speaking Union scholarship. He also recently performed Richard Rodney- Bennett’s Marimba Concerto on BBC Radio 3 with the BBC Philharmonic under the baton of John Wilson and performed at the Royal Festival Hall, as the soloist in 'The Bloodless Giant'; helping to compose and arrange the music. As well as a solo performer, James loves playing as a chamber and orchestral musician, playing in various jazz ensembles; such as a new trio 'Wildebeatz', new London based percussion quartet 'Nataraja', and newly formed groups with singer Lil Rice, Will Heard and guitarist Ollie Clark; with whom he has played at the O2 Academy. He has also recorded percussion with well known artists Sampha, Stuart Zender and soul singer Omar. He is currently studying at the Royal Academy of Music in London with Andy Barclay, Bill Lockhart, Eric Sammut and Colin Currie.

James Larter is a force of nature. A world-class concert given by one of the most impressive virtuosos of his generation.