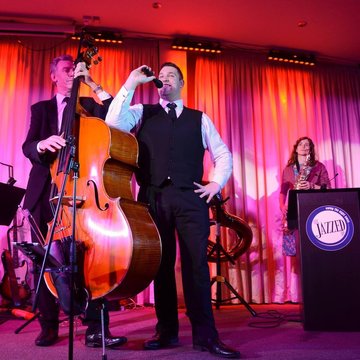 James is a swing and jazz singer based in the south west of England performing with popular swing band All Jazzed Up and as a solo artist.
Singer
Exeter
Verified profile

James is a professional singer from Exeter and is known throughout the southwest primarily for his swing and jazz exploits. He fronts the very popular seven piece swing band All Jazzed Up who play at all types of events including weddings, festivals, private functions and have also run an extremely successful weekly jazz night on the sea frontin Exmouth since January 2017 and is still going strong 18 months later. All Jazzed Up back James’ voice with keys, double bass, drums, saxophone, trumpet and trombone and as you can imagine, it is a fab sound. AJU also go out as four and five piece jazz band. James also performs with a number of other local bands when required including The Drat Pack and The Locked Horns. He also performs as a solo artist either with a pianist or with backing tracks.

James has a fantastic voice, singing all the songs I love

Hi, just wanted to say how great you all were at my sister in laws wedding. There were so many fabulous comments from the guests and I know the bride and groom where over the moon with you. I'm so glad I recommended you to play because you really set the mood which they wanted for their special day. Thank you again xx

What a great evening listening to All Jazzed Up this evening at Ocean Exmouth. Such a great sound. Would be a good band for a Wedding or special function.