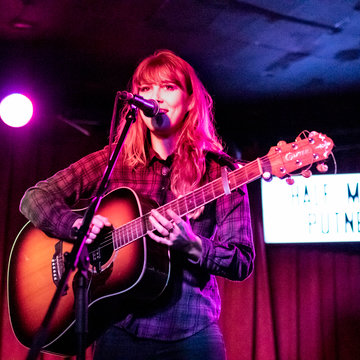 If you asked Jade to describe herself or her music, she would tell you something along the lines of "I'm just me, I'm just Jade."
3 of 8 photos
Singing guitarist
Brighton

F.B - jadestanger Insta - jade_stanger Singer songwriter, actress, and London born and bred, Jade trained at both the BRIT School and Italia Conti, as well as working professionally from a very young age in the performing arts industry. After spending the past couple of years travelling and writing, Jade has grown into a more grounded and secure artist. Although inspired by artists such as Joni Mitchell, Eva Cassidy and Bob Dylan, Jade doesn't try to be anyone or anything. If you asked Jade to describe herself or her music, she would tell you something along the lines of "I'm just me, I'm just Jade." She hopes that her music is reflective of that and if anything, hopes that her music will inspire people to be real and true to themselves. Jade's music is honest, with her only aim being that those who listen feel or take away something from it. 2018 was a rewarding year. After returning from India, Jade spent the summer/autumn sharing her music at The World Yoga Festival, FloVibe and various conscious festivals. Performing on the acoustic stage at LFest, (UK's Award Winning Lesbian Festival) was a highlight of the year, alongside other London LGBT events, such as Queer & Unsigned at Soho’s She Bar. Other recent venues include The Zigfrig Von Underbelly, Hoxton and the renown Half Moon, Putney. 2019 Jade will focusing on releasing music that she been recently been in the studio working on.

We have used Jade for a number of acoustic gigs and she has been amazing every single time! She adapted her set perfectly to our intimate cafe surroundings providing stunning background music for our guests at a number of events including singles mixers and an LGBT social. Her singing voice is beautiful and she is easy to work with!

Jade is a fantastic singer/songwriter. Her comfortable presence on stage helps to really engage with her audience. We’ve had Jade perform on numerous occasions at The Half Moon and they have always been entertaining.

Verified
Catherine A, 2 years ago

Jade is a brilliant artist. Her songs are well written and her voice stunning. I’ve booked her twice for gigs through as a promoter for Queer & Unsigned and both times Jade’s performance was sublime and she was also very pleasant to work with, being both punctual and easy going as a person.