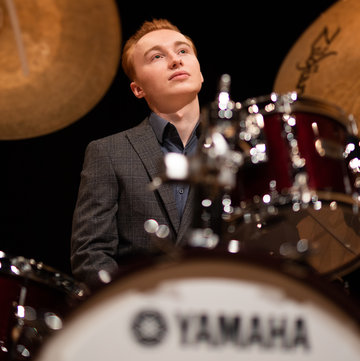 The best function band in Cheshire! Newly formed by Conservatoire graduates consisting of some of the best musicians in the UK
Function band
Warrington
Public liability insurance of £10 million

Jacob Kelly is a British freelance professional drummer and a first class graduate of Jazz Performance at Leeds College of Music under the tutelage of David Walsh. He has previously been granted Jazz Guitar lessons under the guidance of Jiannis Pavlidis on a bursary, after he received his Grade 8 in Classical Guitar at the age of 17. He has studied with Phil Clarke, Leon Parr, Steve Gilbert, Dave Hamblett and has received masterclasses from Danny Ward and Sebastiaan De Krom. Jacob held the drum chair in the award winning Wigan Youth Jazz Orchestra from 2015 - 2017 and the Greater Manchester Jazz Orchestra from 2016 - 2017, where he performed with world renowned artists; Eric Marienthal (Chick Corea), Bobby Shew (Buddy Rich) and Mike Lovatt (Stormzy, Robbie Williams, Oasis). He went on to tour Italy with the band in August 2016. Jacob has also played in a double big band as part of a collaboration of WYJO with the National Youth Jazz Orchestra Of Scotland, which culminated in a performance at Halle St Peter’s, Manchester. In the summer of 2017 he received a special workshop from the Grammy award winning Gordon Goodwin Big Phat Band with Los Angeles drummer Jamey Tate (X Factor USA, Quincy Jones, Taylor Swift) and Percussionist Joey De Leon. Jacob was featured on BBC Radio 4 playing with WYJO supporting Ambrose Akinmusire at the Wigan Jazz Festival 2017. He has also done various session work for clients at Manchester’s Sound of School & Recording and Liverpool’s Parr Street Studios, and has worked with various mixing engineers including Chris Taylor (Rihanna, Justin Bieber). He has also performed in many Musical Theatre productions including Guys and Dolls, Our House and We Will Rock You. He continues his professional work in 2021 with various gigs and performances with Quartets and larger ensembles.

The Jacob Kelly Band is incredible, certainly made our concert sounds amazing, would recommend!

We had the Jacob Kelly Band back again for another year, they just get better!