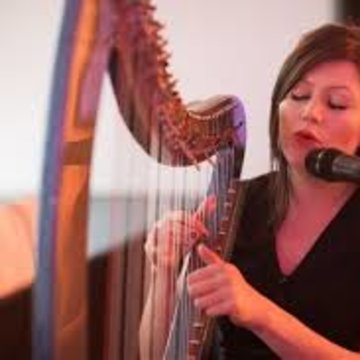 After graduating university in 2011 Iona became a full time performer and within a year had won Sternberg Clarke's 'Next Big Thing' competition. Iona went on to perform at various events including the National Students TV Awards, Scarlet FM Awards and the Official Opening Event for the 2012 Olympic Games as well as having a resident performing spot at the Park Plaza Hotel Westminster. Iona then went on to tour with internationally with Laura Mvula between 2012 to 2016, with Karen Elson in 2017 and with Neneh Cherry in 2018 and now 2019. With these artists Iona has performed on various TV shows including Jonathan Ross, Graham Norton, Jools Holland, Jimmy Kimmel and The David Letterman show as well as on some of the world's biggest stages such as Glastonbury Main Stage, Coachella, The Nobel Peace Prize Concert, V Festival Main Stage, the O2 Arena and the Birmingham LG Arena. As well as touring with Laura Mvula, Neneh Cherry and Karen Elson, Iona has also done session work for such artists as Maxi Jazz, Tom Chaplin, Mr Jukes and Nakhane. Iona is now concentrating on her own path as a solo artist traveling Europe for various function gigs and writing her own original material. While Iona specialises in pop and contemporary covers she has also been classically trained making her set suitable for any occasion.

Depends on how many different locations i'm playing within the venue and how many people are attending, however I usually like to arrive to the venue about 2 hours before to set up and sound check. It takes anywhere between 15 minutes to 1 hour to set up.

Yes. The petrol expense includes the transport of my harp.

I have extension leads - as long as there is a socket within 15 metres of where I'm playing then that's fine.

Yes - for every booking i'm happy to learn 1 song as long as it's playable on the lever harp. This more applies to wedding aisle songs and bookings that are made with more than 3 months notice.

Iona played at a charity dinner at Cutlers' Hall in the City of London. Her music and vocal performance was outstanding in entering the members throughout the evening. David RH Hall Manager

Dear Iona, Just wanted to say a massive thank you for Saturday. You were fantastic. We were so happy with how it all sounded. Particularly walking down the aisle to Norah Jones. It was divine. Thank you for helping to make our day so special. Katie and Simon

Good Morning Iona, Iona you rock! We are delighted by your immaculate services and appreciate your responsiveness and professionalism in ensuring the success of our wedding on the 12th of July. You blew everyone’s mind away. I couldn’t stop smiling when you started singing, you played so well and it was very incredible. Our guests had fabulous remarks about your performance. Thank you for adding a touch of class to our day. Be rest assured we will be sending some referrals your way. Much appreciated. Samuel & Anishah

Good Evening Iona, I just wanted to send you an email to say thank you for playing at our wedding on Thursday. You play so beautifully and your voice is amazing! You had me in tears when I first heard our walk in song! Everyone commented on how great you were and with the venue and weather we definitely had the perfect day! If there is anywhere we can leave a review please let us know and we will be highly recommending you! Many thanks again, Anthony and Emily (Mr and Mrs Garrod)

Thank you Iona for making our wedding day so special! You played and sang our song so beautifully it had us all in tears! I will be recommending you to anyone I can. Thank you again! Stuart & Lisa

Hi Iona, Thank you so much for being with us on our wedding day, we are only a little bit jealous that most of our guests were talking about you rather than us on our day! hehehe Your singing and playing were amazing and we couldn't recommend you highly enough, it was a privilege to have you entertain us on our day. And thank you for accommodating Cyril to sing along side you at the ceremony. Kindest Regards Stew & Marc