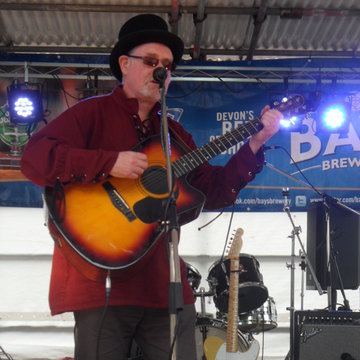 Check availability and get a free quote now - no commitment to book
From£180
Watch & Listen
About Ian
Reviews
Home page
Ian Churchward
Like Ian?
Watch & Listen
Watch
Listen
1 of 1 video
Loyalty Binds Me by The Legendary 10 Seconds

I started to play the guitar in 1979. My first band was called Chapter 29 which was back in 1982. In 1986 I started a new band called The Morrisons who split up in 1988 but got back together in 2003 until 2013. I have also played guitar between 1989 and 2007 in Just A Shadow, Stone Reaction, Storm Force Ten, Shady Grove, The Psycho Daisies ( bass guitar and vocals ), and Phoenix. I am presently playing guitar in a band called Session 75 as well as playing and singing songs as The Legendary Ten Seconds.

If you are a supporter of Richard III you will love the lyrics on this album. If you enjoy mediaeval music with a modern twist you will love the music too! My husband said he thought the style reminded him of Rick Wakeman and I must say I can see his point. However, The Legendary Ten Seconds have their own unique style which is a perfect combination of modern electronic folk and a mediaeval twist. The songs mean something and, for a Ricardian, they are poignant and moving as well. I have a few favourites which are: York City Fayre, Lord Anthony Woodville (never thought I'd say that!), Fanfare for the King and The King in the Car Park. The Battle of Barnet Song is a rather amusing song about Yorkist soldiers turning up too late and too drunk to fight. It's very original and the tunes are catchy.

The Legendary Ten Seconds bring medieval history to life through "Richard III." This new album is a fantastic follow up to their recent "Loyaulté Me Lie" and "Tant le Desiree" albums (also focused on medieval England and the time of King Richard III). Many of these new songs have the feel of a medieval ballad blended with the modernisation of a "folk rock" beat. It is difficult to choose, but I think my two favorites are "The Year of Three Kings" with its great history and "Hollow Crown" with its unique sound and very personalized viewpoint. I confess to being a Ricardian (former Chair of the American Branch of the Richard III Society, Inc), with a love for the late medieval period. This is a wonderful Ricardian album. Feast on the great music and learn some history at the same time.

Murrey B, 6 years ago

All in all it was a fantastic day and if anyone has the chance to catch The Legendary Ten Seconds in concert, I urge you to do so – you won’t be disappointed.

Through the band’s historically based songs, I am transported to a place where Richard’s life seems to converge with our own 21st century existence. The music is an exotic stew of of medieval, Elizabethan, and folk rock swirling with ‘60s psychedelia