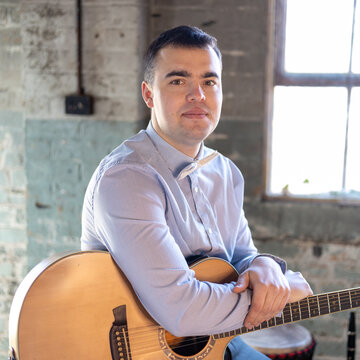 Honza Kourimsky is a highly experienced touring guitarist with an incredibly varied set of songs and singalongs to uplift your event. He has 7 years of experience working on the UK function and wedding band circuit, whilst completing UK wide tours, festivals, and radio appearances with up-and-coming UK artists. His most recent performance highlights include performing on BBC Radio Scotland as well as at the legendary Ronnie Scott’s Jazz Club in London. His experience is supported by a background of formal music education in performance and composition, with a BA (Hons) in Guitar Performance, and MSc in Composition for The Screen obtained at some of UK top music University courses. A naturally driven musician, Honza was quickly identified by staff at Edinburgh Napier University as "one to watch" with regards to his exemplary playing technique/musicality, approach to work and his interactions with fellow musicians. Since graduation, Honza has more than lived up to this early promise. He has become a regular and persistent performer, averaging up to 200+ shows a year, with the rest of his time spent composing, arranging, and recording music for his upcoming events. When not performing, he utilizes his musical talent to compose his own arrangements of the songs in his repertoire, whilst further arranging parts for touring function and funk bands around Scotland. Above all, Honza is a self-starter who manages and organizes all his musical endeavours. He books, prepares, and carries out all his musical appearances on his own accord, always ensuring that his clients are provided with timely communication and direct contact to the musician (himself). When at your event, Honza provides his own sound system and engineering, allowing you to sit back and leave all technical requirements to him. Influenced by his extensive experience as a function musician, his solo guitar set is specially tailored to weddings and private events, featuring tried and tested popular numbers from the 60’s all the way up current day hits.

Set List:
Pop:
Blackbird
Norwegian Wood
Here Comes The Sun
Can’t Help Falling In Love
Can You Feel The Love Tonight
Hallelujah
Imagine
Lady Madonna
Somewhere over the rainbow
When I’m Sixty Four
You’ll Be In My Heart
Killing Me Softly
Tears in Heaven
Wonderful Tonight
Georgia On My Mind
Signe
Watermelon Sugar
All About That Bass
All of Me
City Of Stars
Despacito
Havana
Hello
Let it Go
Paradise
Perfect
Radioactive
Royals
Stay With Me
This is Me
A Thousand Years
When I Was Your Man
You Say
Classic Rock:
Behind Blue Eyes
Beth
Bohemian Rhapsody
Don't Fear The Reaper
Dust in the Wind
Free Bird
Have You Ever Seen The Rain?
Hotel California
The House of the Rising Sun
Let It Be
More Than A Feeling
Nights in white satin
Space Oddity
Tears In Heaven
Time In A Bottle
Turn! Turn! Turn!
A Whiter Shade of Pale
Wonderful tonight
You are so beautiful
You've Got A Friend
Pop Punk:
All The Small Things
American Idiot
Basket Case
In Too Deep
Stacy's Mom
Traditional Wedding Classical Repertoire:
Air
Air On The G String
Allegro Maestoso
Ave maria
Ave Verum
Barcarolle
Bridal Chorus
Canon In D
Caro mio ben
Dance Of The Spirits
Hornpipe
Intermezzo
Jesu, Joy Of Man'S Desiring
Largo
Minuet
Minuet In G
Ode To Joy
Panis Angelicus
Pavane
Prince Of Denmark's March
Sheep May Safely Graze
Spring, First Movement
Trumpet Tune
Wedding March
American Folk:
Amazing Grace
Down To The Valley To Pray
Scarborough Fair
Scottish Folk:
Both Sides the Tweed
Cam Ye O'er Frae France
Fair Flower of Northumberland
The False Lover Won Back
Fortune Turns the Wheel
Glenlogie
Hughie the Grahame
Now Westlin Winds
Rattlin' Roarin' Willie
The Rigs of Barley
So Will We Yet
Tae the Beggin'
Tae the Weavers
The Wild Mountain Thyme
Will Ye Go to Flanders
Green Sleeves
My Love Is Like A Red Red Rose
Caledonia
American Jazz Repertoire:
A Fine Romance
After You've Gone
Ain't Misbehavin
All The Things You Are
Autumn In New York
Autumn Leaves
Aspire
Body and Soul
But Not For Me
Cantaloupe Island
Caravan
Country
Dream A Little Dream
Embraceable You
Fascinating Rhythm
Fly Me To The Moon
Footprints
Have You Met Miss Jones
How About You
I Fall In Love Too Easily
If I Had You
Impressions
In A Sentimental Mood
Its Always You
I Thought About You1
Just Friends
Killing Me Softly
Ladies in Mercedes
The Lady Is A Tramp
Like Someone In Love
Mercy Mercy Mercy
My Buddy
My Favourite Things
New York New York
So Tender
Summertime
Sunny Side of the Street
Sweet Georgia Brown
That Old Feeling
There Will Never Be Another You
What A Wonderful World
When I Fall In Love
French Jazz Repertoire:
La Vie En Rose
Noto Swing
Coquette
J'Attendrai
Djangology
Minor Swing
Nuages
Je Suis Seul ce Soir
Dark Eyes (Les Yeux Noirs)
Manoir de Mes Rêves
Daphne
La Mer
Sous le Ciel de Paris
La foule
Padam padam
Swing 42
Bossa Dorado
Blues En Mineur
C'est Si Bon
Clair De Lune
J’ai Deux Amours
Ménilmontant
C'est Magnifique
Milord
Hymne à l'amour
Made for Wesley
Latin Jazz Repertoire:
Black Orpheus
How Insensitive
Recorda Me
Girl From Ipanema
Mas Que Nada
Bésame Mucho
St. Thomas
Blue Bossa
Desafinado
Wave
Meditation
Afro Blue
O Pato
Obsesion
So Danco Samba
Contigo En La Distancia
Customer questions

Honza is a smiley and professional musician. People love his positive energy on stage and fantastic stage presence. His song choices are popular yet always bring an original sound (which Honza has carefully self-arranged), allowing audiences both to feel surprised and yet comforted by their favourite melodies.

If timings change slightly in the run up to the event just let us know. I will do my best to adapt to the new times, and if the changes are too dramatic, I will be in touch straight away and suggest a couple of great players that could step in on my behalf.

Absolutely. This is a really popular request. I will happily provide DJ services between sets, additionally I can provide up to 45 minutes of music before the set.

I can set everything in under an hour. I will set up the PA first to provide your guests with DJ music (if wanted) to set a lovely pleasant atmosphere, and will then proceed to set up my instrument and music and finally warm up.

My set list for the wedding reception is crafted from countless performances and learning what works best to ensure guests are having an amazing time. However, I'm definitely happy to chat through and make sure we find what works for your event. You can of course choose songs to be performed during the wedding ceremony.

Yes I bring everything I need so you do not have to worry about any technical or performance aspects.

We were completely delighted to have Honza play at our wedding celebration! As well as bringing his considerable musical talent, Honza brought charm and a lovely personality to our intimate gathering. All of our communications were smooth, and we would have no hesitation in highly recommending Honza as a professional and talented musician for a wedding or other event.

Honza was fantastic. An absolute professional through and through — he answered any questions really promptly, he was so polite and friendly. Honza arrived early to get set up and he played an amazing set which was a huge hit with our guests. I could not rate this chap any higher! Don’t hesitate, book him for your event!

I hired Honza to provide an ambient jazz atmosphere to a fundraising festival event promoting culture and art in Leith Edinburgh. Honza performed the most entertaining set filled with wonderful popular tunes the audience could hum along to, he was charismatic and entertaining on stage keeping everybody engaged and laughing, and generally brought the whole room together and elevated the evening. All technical requirements of the performance were also handled on his part, allowing us to focus on ours guests and on the general smooth run of the event. I would highly recommend Honza to anyone needing a guitarist for their private event, party, or wedding.

MK
Marketa K
1 year ago, for a Wedding in Martin-Luther-Ring 4

We hired Honza to play at our wedding ceremony. He was incredibly professional and friendly to work with, he provided his own gear, sorted out all technical requirements for the performance and performed the piece we requested wonderfully. Throughout the hiring process he maintained constant communication, which was most welcome, as it kept us assured we were getting what we wanted. We're very happy we hired Honza for our wedding ceremony and would gladly recommend him to others.