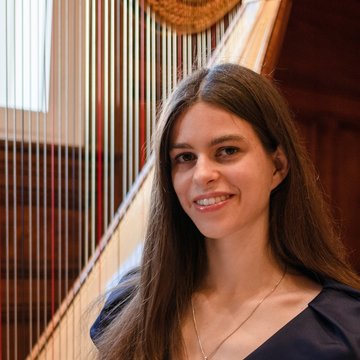 Her path to a musical career led Henriette from the Hochschule für Musik ‘Hanns Eisler’ in Berlin via Cambridge University to the Royal College of Music in London where, with support from the Philharmonia Orchestra’s ‘Martin Musical Scholarship Fund’, she continued her studies with professors Ieuan Jones and Stephen Fitzpatrick and has benefitted from masterclasses with Marisa Robles, Jana Boušková, Emanuela Degli Eposti, Isabelle Perrin, Sivan Magen, Elisabeth Fontane-Binoche and others. She has since graduated and, thanks to a scholarship from the Royal College of Music, will be able to study for a Master’s degree from 2019/20. Henriette enjoys herself as a soloist, an orchestral, and a chamber musician and has widely performed across England, Germany, Poland, Spain, and China both as a soloist and as an accompanist with several of her performances recorded or broadcast live by radio and television. She also has recorded at well-known venues like the Abbey Road Studios in London. As a soloist and in ensembles Henriette has played and/or recorded more than a dozen world premieres. Internationally established composers like Elżbieta Sikora and Maciej Małecki have written solo works for her. She has played under conductors like Rafael Payare, Carlos Izcaray, Martyn Brabbins, Michael Rosewell, Peter Stark, Stuart Pedlar, and Krzesimir Dębski. With the Young Babelsberg Film Orchestra in Berlin she recorded the soundtrack to a TV thriller and, in 2018/19 was privileged to have been selected by the BBC Symphony Orchestra for a placement under their Pathway Scheme. Among Henriette’s competition successes are First Prize at National Level in the German ‘Jugend musiziert’ competition, ‘Norfolk Young Musician of the Year 2014’ runner-up, and winner of the East Anglia Harp Festival three years running. She won joint first prize in the RCM’s 2019 harp competition. Less conventionally, Henriette has been involved in trialling different innovative low-latency synchronous video-streaming technologies, and, from the RCM’s Belle Shankman Studios, has already performed twice at the Network Performing Arts Production Workshop live in concert - being streamed onto a translucent screen in Copenhagen, and, in 2019, demonstrated the technology in concert in a long-distance duo with violinist Matouš Pěruška at the HAMU in Prague. While eagerly exploring the chances and advantages for music in an increasingly digital age, Henriette is passionate about communicating the joys of live music and music-making to audiences at both ends of the age spectrum. Her moderated concerts for a range of charities are always enthusiastically received, but Henriette also regularly assists in music workshops for children, specialising in early years, and as a Teacher Ambassador for the RCM Museum has created and most successfully delivered her own early years music workshop.

Would love to hear your favourite songs? I am very happy to make an arrangements specially for you.
Have an atmosphere in mind but not too sure which music to choose? Let me know what mood you would like and I can find the right music for your event.
Customer questions

It is my aim to provide the best possible service to you, so I am as flexible as possible. Just let me know as soon as you think something might change. Please note that I might have to adjust the quote should changes be significant.

I normally need one to two hours, but it depends on your venue. Once I have more details, I can let you know precisely how much time I will need.

Yes, the transport of my harp and porterage are included in my quote. There are no hidden costs.

I am happy to provide all equipment required to play in favourable weather conditions. Unfortunately, due to the nature of the instrument, I am unable to play outdoors when it is raining or during very strong winds.

Yes, I am very happy to arrange songs or pieces specially for you. This service is included in the fee quoted, if the request is made within up to one month in advance of the event.

A truly talented girl. So polite and friendly and absolutely amazing on the harp! Was a hit with the guests and just such a pleasure to have at our ceremony. So pleased we chose Henriette and the song choices were amazing! Thank you so much

Henriette performed during our wedding reception and she was just fabulous! Highly recommend her.

Henriette is an amazing Harpist and made our event a great success by the quality of her music. I would recommend her 100% ! Thank you

Henriette's playing is unusually stylish: she has great musicality and produces performances of great expressivity. What is more, all this is backed up by considerable technical abilities. [...] her playing communicates directly - and very persuasively - with audiences.

Wow! You were magnificent..and the music you chose, sublime...Thank you so very much for your time and talent... completely wonderful! Such charm and grace...rare to find in the young these days... So grateful!

Henriette Poos is a wonderful harpist. I sat enraptured while she played. The concert also featured a trio, a saxophonist and a choir. Magnificent.