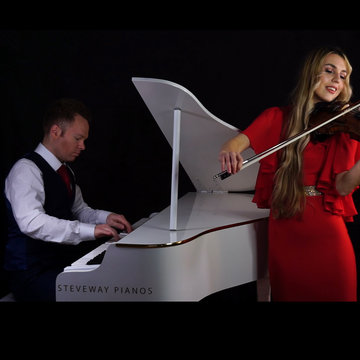 About Piano and Violin duo

We are a piano and violin duo which use a white portable grand piano. Our vast repertoire consists of Classical, Popular, Jazz, Bollywood.
3 of 14 photos
Acoustic duo
Basingstoke

We are a piano and violin duo with a vast experience in performing all over the world with an impressive wide ranging repertoire. Alexandra is a violinist of Ukrainian origin, trained in Tchaikovsky Musical Academy in Kiev, where she obtained a Master of Music degree with Honours, and has performed worldwide with the National Symphony Orchestra of Ukraine, chamber ensemble Kamerata, Ukrainian National Opera, New Era Orchestra. Also she has played as a guest entertainer on Cunard line, P&O cruises and Fred Olsen. Aleksandra plays fine Italian violin, electric Bridge Aquila and electric top of the range Yamaha violin. Simon Galfe has trained at Southampton University and he is an incredible Jazz piano player who also plays Classical and Pop music. He has played for Prince Charles and Prince Philip. Simon has entertained audiences on cruise ships such as Cunard, P&O Cruises, Princess Cruises and Fred Olsen Cruises. As a duo we have featured reguarly at many of London's most exclusive venues such as Claridges, The Dorchester, The Savoy, Waldorf Hilton, The Lanesborough, The Grosvenor House, Syon House, British Museum, Natural History Museum, Intercontinental, Harrods and The Shard.

Every additional hour after the finalised timings would be extra £80. We will be more than happy to stay overtime if needed.

We leave the music from our PA playing between the sets. It’s included in our fee.

Once we set up, the piano shell ( portable grand piano) can not be moved. The violinist however can roam around the room with a wireless setup for the electric violin, or with acoustic violin.

You can add up to 10 custom requests if you don’t see the song in our song list. We know almost every song possible.

The price for the piano shell and the PA could vary.

We know almost all the songs which exist, but if we don’t- we can learn it easily at a short notice.

Standard Prices
2 musicians
All prices include:The prices shown above are for the piano and violin. All the add-on features like the piano shell ( the luxury portable grand piano) comes at the additional fee which can be discussed. It depends on the venue’s parking facilities.

Aleksandra and Simon were amazing. They play a high level of music and can play virtually anything. The portable piano that Simon uses is stunning.

We have had Simon and Aleksandra performing for our wedding and we can’t recommend them enough. Communication was perfect from start to finish and their playing was fantastic. It’s the best piano and violin duo, virtuosic and talented. There is no song they can not play. Absolutely phenomenal.

Verified
Stephen A, 7 months ago

Harmony Duo was entertaining our guests at the Birthday Party in our house. Everyone was stunned by their level of performance and stage appearance. They played every single request and made us and our guests so happy. It’s the best Birthday present you can get-top world class musicians at your private party.