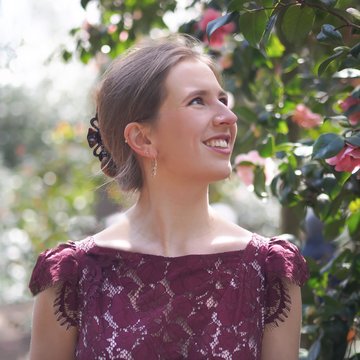 Hannah currently works as a freelance contralto in London and has sung with some of London's top choirs including St Bride's, Brompton Oratory, Hampstead Parish Church and St James's Roman Catholic Church (Spanish Place). She recently finished as a member of Genesis Sixteen and is looking forward to working for the Armonico Consort in the new year. Hannah graduated from Trinity College, the University of Cambridge in 2018. As a choral scholar in Trinity College Choir, Hannah has performed works such as the Bach B minor Mass at St John Smith's Square, and has performed alto solos in CD Recordings of works such as Vaughan Williams O Vos Omnes and Mass in G Minor. Hannah has participated in tours most recently to Canada, The People's Republic of China and Hong Kong, New York and Germany.

A contralto is a rare voice type so people are generally excited by a warm lower female voice!

It was a non disclosure agreement one so I couldn't possibly say!

I do not use an iPoD or DJ for my style of singing.

No time at all, I will always warm up in advance of a gig.

I do not have set lists of repertoire.

I do not require any equipment for my style of singing.

Yes absolutely! Do let me know as far in advance as possible what piece you would like to be performed and I will happily learn it for the occasion.

It was a pleasure to work with Hannah on Saturday. She was completely professional and punctual throughout our correspondence, and she sang brilliantly at the wedding itself. I would strongly recommend Hannah.