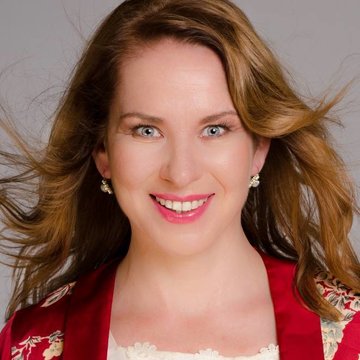 I'm an Irish contralto based in London, a charismatic performer who always brings a special magic to every occasion!
3 of 7 photos
Singer (alto)
London

Gráinne Gillis read Music at University College Cork and graduated from the Bristol Old Vic Theatre School. Since re-training as an opera singer, she has worked as an Emerging Artist for Opera della Luna in The Gondoliers, and performed La Nourrice in Ariane et Barbe-Bleu, Zita in Gianni Schicchi, and the Mother in Hansel & Gretel twice; La Zia Principessa in Suor Angelica; Dryad in Ariadne auf Naxos; Baba in The Medium; Annie Jump-Cannon in The Observatory for Improbable; 3rd Witch in Macbeth for English Pocket Opera Company; Madame Popova in The Bear; Suzuki in Madama Butterfly for Secret Opera; Dritte Dame in Die Zauberflöte and Dama/3rd Witch in Macbeth for Pavilion Opera; Frugola & Lucia in Il Tabarro and Cavalleria Rusticana respectively; The Sorceress in Dido and… and Formations 2016 for The Helios Collective, playing Flora Sandes in Dead Equal at ENO Baylis, supported by ENO and the IOA. Future engagements include Annina in La Traviata for Pavilion Opera in 2017. Gráinne also has extensive experience as an actress and voiceover artist. "A special mention must go to the singer [Gráinne Gillis] who took over the role of Suzuki at very short notice..... She did a remarkable job despite the circumstances – her flower duet with Bork was delicate and harmonious..." - Manuel Munoz, A Younger Theatre on Madama Butterfly, Secret Opera 2016 “Gillis – whose voice has rich, dramatic potential – [is] powerful in the title role.” Fiona Maddocks in The Observer on The Medium at Grimeborn .

Thank you so much for your amazing performance at Crusaid's Summer Garden Party last Sunday. Although it's only a couple of days since the event, I've already been deluged with really positive comments from guests and many of them have particularly said how much they enjoyed your being there...Perhaps you could let me know when you're next performing in London, as I'd love to come along and have the full 'Grainne Gillis experience'!"

I want to thank you for making our garden party sooooo lovely. You were totally an absolute delight. Wanting to use more superlatives…"

“Gillis – whose voice has rich, dramatic potential – [is] powerful in the title role.” .

'I was extremely lucky to be able to book Grainne to sing at my wedding recently and it was easily one of the highlights of the day. Grainne is not only supremely talented but a total professional. I'm not very knowledgeable about opera and Grainne was nothing but delighted to sing some of my rather random song requests and also gave us some much appreciated guidance on song choices. It really added a captivating sparkle to the occasion and I cannot recommend her highly enough'

A special mention must go to the singer [Gráinne Gillis] who took over the role of Suzuki at very short notice..... She did a remarkable job despite the circumstances – her flower duet with Bork was delicate and harmonious..."

Singer (alto)s in the UK