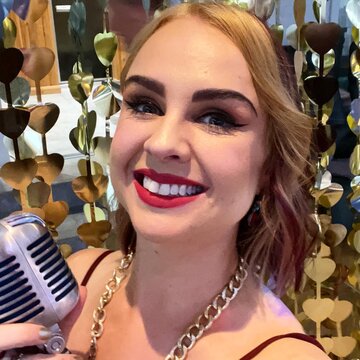 Vintage Singer Gemma Jones. With her impressive repertoire and stunning costumes she adds that extra bit of glamour to your event!
3 of 9 photos
Singer
St Albans
Public liability insurance of £10 million

Originally from Wirral, Gemma has been one of UK’s most requested singers for over a decade now. With Classical and Musical Theatre training she has had a diverse singing and music background. She is also a trained dancer and has stunned audiences with her exceptional on stage performances. During her career spanning over 14 years, Gemma has had the opportunity to work as a Guest Artist for various cruise lines such as Royal Caribbean and Holland America. She has also served as the onboard Showteam’s lead vocalist for some of the leading and most popular cruise lines. Her passion for music and singing from a young age has always inspired Gemma to entertain guests at the wedding parties, corporate events and other functions. This is primarily why today she is one of UK’s preferred singers for high profile events and parties. Her achievements include singing the National Anthem at Wembley Stadium, on several occasions but she has also appeared on BBC1 “The Voice UK” . Gemma is a key member of the Caamora Theatre Company and participates in numerous musical theatre shows organised by the company. Currently, Gemma is receiving vocal training under highly experienced vocal coach David Barrett wherein Barrett is training her around the Bel Canto tradition of ‘good singing’ and beauty of tone. In December 2016 Gemma released her first Solo album entitled “ Vera Voce”.

Gemma's repertoire includes Jazz , pop, swing and soul songs from the 1920's onwards and Post Modern Jukebox Songs
Jazz
Don't know why
Cry me a river
Moon River
Bye Bye Blackbird
Cheek To Cheek
Putting On The Ritz
Night and day
Fever
The nearness of you
Ain't no sunshine
I'll be seeing you
Under my skin
Besame Mucho
At Last
Summertime
My funny valentine
At Last
Post Modern Jukebox
Like A Prayer
Toxic
Oops! I did it again
All About That Bass
Love Fool
Stay With Me
Swing
Blue moon
When I fall in love
Let there be love
Perhaps, Perhaps, Perhaps
Fly me to the moon
Sway
Moondance
Stella by starlight
Desafinado
Que Sera Sera
Route 66
Secret Love
War-time / Sing-a long Songs
White Cliffs Of Dover
Its A Long Way To Tipperary
I'll Be Seeing You
The Lambeth Walk
Show Me The Way To Go Home
Lily Of Laguna
When Irish Eyes Are Smiling
Moly Malone
We'll Meet Again
Wish Me Luck As You Wave Me Goodbye
Pop
Songbird
Close to you
Skyfall
True Colours
Let It Be
Uptempo Set
I Just Want To Make Love To You
Be My Baby
You Can't Hurry Love
Build Me Up Buttercup
Can't Take My Eyes Off You
Dancing In The Street
Carwash
Lady Marmalade
Valerie
Mercy
I Will Survive
Ladies Night
Young Hearts Run Free
Its Raining Men
Abba Medley
Customer questions

I always try my best to be flexible to help ensure your event runs as smoothly as possible. If timings change slightly in the run up to the event just let me know.”

Verified
Alex A, 1 year ago

I had Gem and Yue provide entertainment at my parents anniversary. They were really easy to talk to and made the whole process simple and straightforward. Gem and Yue were the highlight of the evening. Everyone was blown away by how talented they were and as a duo they work so well together. They were really friendly and everybody loved them. They are so versatile, able to provide a soft backdrop while we ate, and then later get everyone up on their feet dancing and singing along. They are a unique act and I am so grateful to them for making my parents anniversary a night no one will forget!

We booked Gem and Yue for Valentines night and I have to say - after six years of running the Queens arms - it turned out to be exactly what we’ve been missing in the previous years. Gem and Yue performed so well together that they had the guests completely absorbed from the opening bar. From up tempo songs like Jolene to the beautiful moon river. The singing, playing and harmonies were performed brilliantly and you could see that these two have a great understanding and joy at performing together. Although they have a strong repertoire, requests weren’t a problem either. I can’t wait to get them back. Gem and Yue are now the first people I turn to when booking for weddings and birthday bashes.

Gemma was amazing, such a fab performer and knew exactly what songs worked well and was so engaged with wedding party! Incredible voice, could not have wished for more! Very professional yet down to earth, relaxed and so easy to talk too, would highly recommend.

Gemma was a joy to watch when I saw her sing at Hanbury Manor, she had charisma, charm and a very professional modest approach to her work, not to mention the quality and genuineness in her singing.

My wife and I recently went for Sunday lunch at Hanbury Manor, where we had the pleasure of listening to the melodic voice of a young lady named Gemma, we didn't catch her surname. she was absolutely fantastic. the food was excellent, but was made all the more pleasurable by the presence of this delightful singer. we shall certainly be returning, and hope that Gemma is there to entertain us once more.

My friend treated me to afternoon tea at Hanbury Manor on 11/10/15 and we were entertained by a beautiful singer Gemma. Her repertoire and quality of singing was just superb.