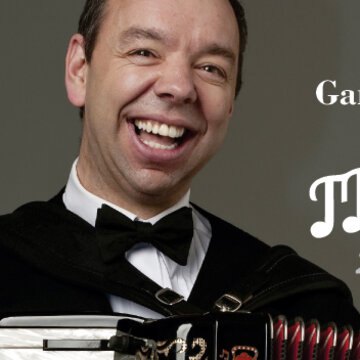 Let's get the party started ! Gary is the No 1 entertainer and wedding band specialist in the Central Belt of Scotland

Covering popular tracks from the 60s through to the latest chart hits plus ceremony music and drinks reception if required Gary can provide entertainment for you and your guests for the whole day and evening. He will add extra band members depending on your event and will have your guests up on their feet all night long in a relaxed fun way. He is the Wedding Band and Family Party Specialist ! His infectious bubbly personality has all the main ingredients and experience for getting any party started. He has composed and produced music for the BBC and ITV, played at the Edinburgh Festival, The London Palladium , Glasgow Year of Culture, played for Prince Charles and has appeared on numerous recordings of DVDs and Online Streaming His musical ability on Accordion, Keyboards and Trombone are second to none - The Glasgow Herald quotes Gary as being "as slick as brill cream" Gary received an MBE in 1999 and is proud to be the patron of Down’s Syndrome Scotland He was also named Alumni of the Year in 2014 by Napier University

Songs for Weddings and Parties include anything from Frank Sinatra to the Killers!
He will accommodate all decades of music from the 60s onwards and will play all requested songs from any new dance craze or the new No1.
Hits by Calvin Harris, Stevie Wonder, Queen, Bryan Adams, Abba, Robbie Williams and Bruno Mars are all played live.
Scottish Dances
Gary will play and call every Ceilidh Dance you wish.
His list of songs is endless !
Customer questions

Yes, Please send me a playlist or even use your phone on the night to lplay your requests

Thank you very much for making our staff party such a great night. The atmosphere on the night was more like a party than a ceilidh with everyone joining in and thoroughly enjoying themselves. Christine Dickson Investment Administration Manager Bank of Scotland

"The Xmas events which you played at really added to the guest’s enjoyment of the hotel. I look forward to working again with you next year." Steven Mcleod Chief Executive Airth Castle Hotel and Spa Resort