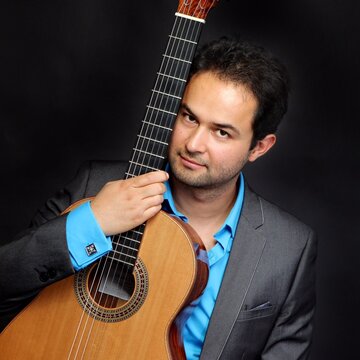 Guitarist Francisco Correa was born in Colombia. After obtaining a Bachelor of Music degree in Bogotá in 2003, he continued to pursue the study of the guitar in France and in Spain, completing his first Master’s degree in guitar performance at the Scola Luthier in Barcelona, a Jazz guitar degree in France and a second Masters Degree at the Royal Academy of Music in London. A prize winner in many classical guitar competitions in Colombia, he has also been awarded the "Médaille d’Or", as well as the "Prix de Perfectionnement" from the Conservatoire de Saint Germain en Laye, and d´Aulnay-sous-Bois both in France where Francisco studied with Judicael Perroy. Francisco has performed many concertos with orchestra, both in England and Colombia, and has appeared on Colombian radio and television as a soloist performing the Aranjuez Concerto with the Bogota Philharmonic under the direction of Irwin Hofman. He is a regular recital soloist, and is often invited abroad to perform in festivals (most recently in Mexico, France, and Colombia). As well as his solo career, Francisco is an enthusiastic chamber musician: he has recently set up a flute and guitar duo called Alba Duo with flautist Samantha Pearce. He also has performed on an ad-hoc basis in England, France and Colombia with his wife, flautist Emily Andrews, and at the Royal Academy of Music with multiple prize-winning Belgian soprano Charlotte Schoetters, and Spanish soprano Lorena Paz. Francisco's passion for folk music inspired him to tour Colombia, Mexico, Peru, Venezuela, Czech Republic and Poland as a multi-instrumentalist with the folk ballet of Tundama, as well as Scotland with "Familia Correa", a Colombian folk music group he has formed with his father (guitar and voice) and his wife (flute, violin and voice). Fluent in three languages, Francisco is an experienced guitar teacher having taught in schools in Bogota and Paris and currently he is guitar teacher at Prior Park College in Bath. His debut album has been reviewed and praised by the most important guitar magazines worldwide.

I always try our best to be flexible to help ensure your event runs as smoothly as possible. If timings change slightly in the run up to the event just let me know.

I usually set up about 1 to 1.5 hours before the performance time

If there is a special song you'd like us to learn we are happy to do this for you. There is a fee of £30 for this service to take into account rehearsal times etc.

NEW!Virtual services
Bespoke music video
I'll produce a unique music video with professional recording equipment. I can customise the video with your own branding and lyrics!
£100

It was one of the most musical performances of the Concierto de Aranjuez that I can remember....sensitive and transparent, seemingly effortless.

Thank you so much for your beautiful playing on Saturday. There was such a lovely atmosphere and it all went so smoothly - and thank you for moving around with the guests! I'll recommend you in future for anyone who needs music for a party!