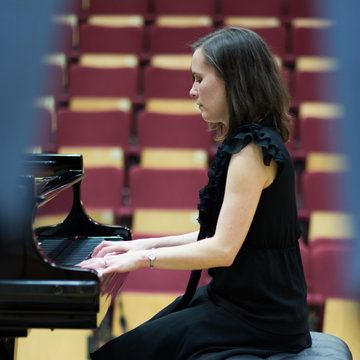 Check availability and get a free quote now - no commitment to book
From£160
Watch & Listen
About Erica
Home page
Erica Avery
Like Erica?
Watch & Listen
Watch
Listen
1 of 1 video
Lucille and Erica - Saxophone and Piano Duo

Erica is a versatile musician based in Birmingham. Available as an accompanist or solo pianist.
Pianist
Birmingham
Public liability insurance of £10 million

Erica Avery graduated from the University of Birmingham in 2004 with a BMus(hons). She now enjoys a varied music career, incorporating teaching, performing and composing. Erica has composed two musicals for Edinburgh Fringe and numerous scores for plays by Little Earthquake, Through The Window Theatre and The Crescent Theatre. Recent projects include music for The Crescent Theatre's Christmas 2014 production of Roald Dahl's The Witches and a choral piece for their Wassail production in December 2015. Erica is a versatile musician. She enjoys working for Birmingham Music Service as a peripatetic piano and keyboard teacher in primary and secondary schools. She is also in demand as a piano, keyboard and flute teacher privately and has a thriving and varied range of pupils. Erica accompanies for Sing it Loud - a community choir based in Leamington Spa. She has also previously accompanied for Armonico AC Academy children's choir and also for their choir projects in schools across the UK. Through her work with Armonico, she has performed alongside Russell Watson at Symphony Hall in 2014 and Strictly stars Kevin Bridges and Karen Hauer at the RSC Theatre in 2015. She also recently performed as a keyboard/vocals deputy on the Jersey Boys UK Tour.