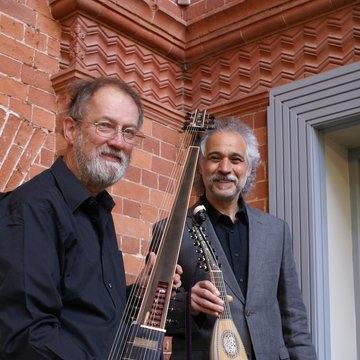 Enzo turned professional in 1984 specialising in historical music. His trio Grynwode toured the UK extensively until its end in 1991, giving concerts (including Spain, Germany and Australia), appearing on TV and radio and playing for special events. With Grynwode he recorded two albums, playing the lute, cittern, colascione, orpharion and English bagpipes as well as hurdy-gurdy. Since then he has used a different name for his solo career as an Elizabethan minstrel. In 2012 he created Duo Piccolo e Grande to explore non-mainstream music-making in the baroque era. The featured instrument is the mandolino, a precise replica of the ivory and ebony 1752 original in the V&A museum. The hurdy-gurdy adds to an already interesting programme and all the music is accompanied by the theorbo.

Thank you so much for giving us a real musical treat this lunchtime, for instructing us so well and for injecting a sense of humour into the proceedings. I and many, many others greatly enjoyed listening to the two of you today and we now have very good reasons for asking you both to return to us in Louth.

I want to thank you and Stewart for an excellent and most enjoyable concert last Friday.  As you could see, we were sold out!  Several people have told me how much they enjoyed it.    We all loved the little portraits of the composers in just a few words, and the chance to see the instruments afterwards.  It was all very intimate, enjoyable, yet at the same time educational.  Thank you so much!