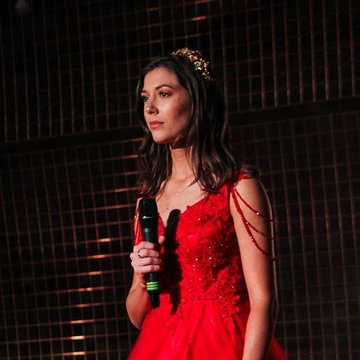 Check availability and get a free quote now - no commitment to book
From£180
About Elizabeth
Reviews
Home page
Elizabeth Leaver
Like Elizabeth?
Watch & Listen

Recently transitioned Mezzo Soprano, Elizabeth Leaver, was born in London and raised in Essex. Throughout her life, Elizabeth has gained multiple music scholarships in her education including The Donald Gosling Foundation of Music bursary awarded to her at Westminster Cathedral. Elizabeth has sung internationally including chapels within South Africa, Serbia, Turkey and the Vatican City in Rome. She also gained choral experience in The National Youth Choir of Great Britain and decided to peruse her passion for classical singing. She is currently based in Birmingham in her final year of undergraduate study at the Royal Birmingham Conservatoire with a scholarship under the tuition of Amanda Roocroft. Elizabeth works as a freelance singer and enjoys a busy performance career. When she is not singing she enjoys teaching. She has recently been working with the Music Services for Education within Birmingham’s top nursery, primary and secondary schools. Elizabeth is a versatile singer who loves to explore musical theatre repertoire as well as music in many languages including Turkish, Latvian, Polish, Russian, German, French and Italian. Elizabeth has appeared in Royal Birmingham Conservatoires staged operatic productions as the chorus in Offenbach’s La Vie Parisienne, Mozart’s Le Nozze di Figaro and Zerlina in Mozart’s Don Giovani. Elizabeth has also performed in professional companies outside of Birmingham including Winterbourne Opera’s production of Die Fledermaus as Ida.

A Night in Turkey with Elizabeth Leaver was a truly spectacular show. The event was packed with a variety of Turkish musical performances, mesmerising performances from belly dancer Ozlem Akyol, and a lively Middle Eastern atmosphere complete with photo booth, authentic Turkish cuisine and artistry by Simran Channa Henna. Elizabeth has clearly put time and thought into A Night in Turkey and it came together to create a dazzling Turkish experience in The Engine Room at Freedom Church. Though I didn't spend a lot of time with Elizabeth, I enjoyed my time with her and the Sesli Kraliyet Choir conducted by Dylan McCaig. The event was very well organised with nothing getting out of control and I felt a sense of welcome from her and the choir considering I had only worked with them on the day of the event. If this is her standard of working, I very much look forward to her next project.

I was the conductor for Elizabeth’s very successful major project, ‘A Night in Turkey’. Since starting working with her in November 2018 to the concert date in March 2019, I have found Elizabeth to be hyper efficient, punctual, incredibly professional and very understanding! I have also had the privilege of seeing Elizabeth perform live. Elizabeth’s vocal tone and poise make her standout as a high profile artist! I would recommend Elizabeth for any wedding/funeral or professional/high profile event!

A beautiful Mezzo voice allows to a fine sense characterisation. She is also has a very versatile musical and linguistic approach. An outstanding collaborator with a keen ear for detail and a masterful stage presence. She is a super fun and personable colleague with a very strong work ethic and a brilliant sense of perspective. Really enjoyed our recital together and would love to work with you again on more Lieder! 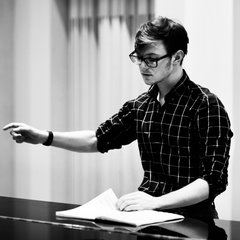 I was the conductor for Elizabeth's very successful Major Project, 'A Night in Turkey'. Since starting working with her in November 2018 to the concert date in March 2019, I have found Elizabeth to be hyper-efficient, punctual, incredibly professional and very understanding! I have also had the privilage of seeing Elizabeth perform live. Elizabeth's vocal tone and poise make her stand out as a high profile artist! I would recommend Elizabeth for any wedding/funeral or professional/high profile event!