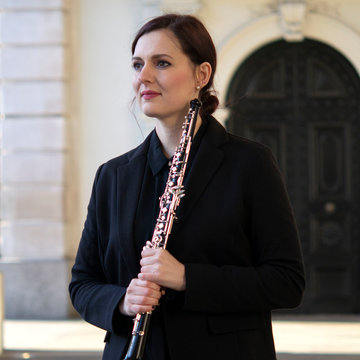 "Without music, life would be a mistake.” Friedrich Nietzsche
3 of 5 photos
Oboist
Italy
Public liability insurance of £10 million

Elena is an Italian oboist. She started playing the oboe at the age of 8 with M° Evaristo Casonato. After the first grade at Conservatorio Tomadini in Udine in 2005, she continued studying oboe under the direction of M° Elena Musto and M° Serena Gani. In 2009 she gained a professional diplome in performance at Conservatorio A. Buzzolla in Adria. She concluded several masterclasses with some important italian oboists such as Paolo Brunello, Giovanni Scocchi, Renato Duca, Luca Vignali, Nicola Barbagli, and several chamber music masterclass with Hanna Morgan, Laurence Perkins, Wlater Boyekens and Jane Booth. During the years, Elena gained an extensive experience playing with numerous symphonic orchestras, chamber orchestras and as a soloist. From 2009 she started her freelance career in Italy playing for orchestras such as Benacus Chamber Orchestra (Garda Lake - 2009-2012), Piccolo Festival FVG (2013), National Symphony Orchestra JMIYO (2009), orchestra Classica del Veneto (2014) and many more. From 2014 she moved to London for her PhD at UCL, and started to play with London City Orchestra, Blackfriars Symphonia, UCL Symphony Orchestra, JP Morgan Symphony orchestra, Central London Orchestra, Fidelio Orchestra, Albion Riverside chamber music in some of the most important concert venues. Elena is also passionated in teaching. She has 10+ years of experience in teaching oboe, solfeggio, reed making and music theory to several pupils aged from 6 to 60, all levels form beginners to advanced. She teaches the fundamentals of technique, tone production, musical interpretation, repertoire, and performance preparation. Moreover, the art of oboe reed making is an important and helpful part of her teaching method.

Elena was helping with teaching in my music school. She has always shown outstanding empathic abilities towards students and delicate and understanding attitude, thanks to which she effectively delivers good quality teaching results. She knows how to explain difficult topics using an understandable and easy language for children.

Elena plays beautifully and is a pleasure to work with! A great asset to any group.

Very good oboist and very professional player. All the guests were enthusiastic about her way to play. Original and captivating repertoire.

Oboists in the UK

Oboists in the UK
Oboists in London
Oboists in Birmingham
Oboists in Manchester
Oboists in Edinburgh
Oboists in Liverpool
Company
Discover
Download
Join us on
© Encore Technologies, Ltd.
Crafted with bagels and in London