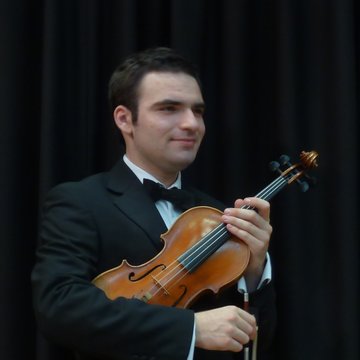 Music performance student, interested in everything related to playing itself whether solo or in ensemble, classical or not ~
Violinist
Birmingham
Public liability insurance of £10 million

Born in 1995 in Cracow, Poland into a musical family, Edwin Podolski started learning the violin at the age of 6 and was soon admitted into a specialist music primary school. His next educational step was the Wladyslaw Zelenski Second Degree State School of Music and then Royal Birmingham Conservatoire where he focussed on classical violin solo performance, with Simon Smith as his main teacher. In addition to that, Edwin is determined to explore the widest possible world of music, including everything that lies close to the domain of violin playing. Edwin’s interests in folk music began with the Cracow Song and Dance Folk Ensemble “Krakowiacy” with whom he participated in street parades and stationary performances in Greece and Montenegro, playing traditional Polish music. Since 2016 until the last summer Edwin had been also a proud member of Joe Broughton’s Conservatoire Folk Ensemble, having performed modern arrangements of traditional tunes at several folk festivals across the country. In addition to playing with the ensemble, Edwin occasionally enjoys fiddling Irish tunes on his own too, in a more conventional manner. Edwin’s experience with high standard orchestral music began in Poland, leading the 2nd violins in Cracow Youth Chamber Orchestra on several concert tours. Edwin has also played a solo in a recording with Cracow Chamber Orchestra. In the UK he has lead the CBSO Youth Orchestra and co- lead YMSO. Edwin has also participated in orchestral schemes with CBSO, Royal Ballet Sinfonia and WNO Orchestra. Other ensembles include Street Orchestra Live and Nevis Ensemble, with whom in the couple last years he has given a total of approximately 200 outreach performances in a variety of settings, including homeless shelters, schools and the summit of Ben Nevis. Recently Edwin has also led BISYOC (Intercultural Youth Orchestral Exchange) for the 3rd time in a row, in 2019 happening in the Republic of North Macedonia. In addition to the violin, Edwin has also been honing his skills as a violist and a performer of contemporary music. This has included playing for Infinite Opera and collaborating with the Royal Birmingham Conservatoire’s composers, with several events involving improvising on stage, both in concert and theatre settings. On the top of everything, Edwin is also a committed chamber musician, rehearsing and performing music in a wide variety on genres as a member of MAKK string quartet.

"We have featured the MAKK String Quartet at the Great British Tea Festival for the past two years. They have proved extremely popular with visitors, providing the perfect classical musical accompaniment from a vast repertoire. I would have no hesitation in recommending them."