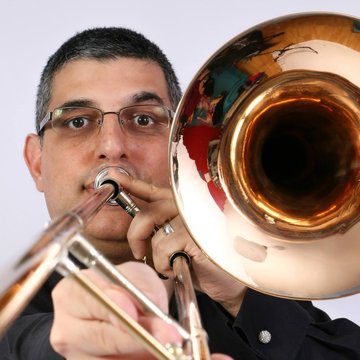 I started learning the trombone in 1981 while attending the John Lyon School in Harrow. I studied with former Hallé Orchestra principal trombonist Maisie Ringham, switching from tenor to bass trombone in 1985 before leaving to read Modern Languages at the University of Westminster. While taking a degree course at the University, I studied bass trombone with Ronald Bryans at the Guildhall School of Music and Drama. During my years at university, I studied abroad in France (at the Université Michel de Montaigne Bordeaux III) and in Austria (at the University of Innsbruck), also studying trombone at the local music colleges. I became a member of the British Trombone Society in 1989 and from 1997 to 2015 was the webmaster, also serving on the Board of Advisors. In 2001, I wrote an article on Haydn’s Creation for the British Trombone Society magazine, The Trombonist, entitled Creating Problems. In 2002 I created Trombonanza, a multi-faceted trombone ensemble, in which I play bass and contrabass trombones, and also arrange music for orchestra, wind band and brass ensemble, and trombone ensembles of different sizes. 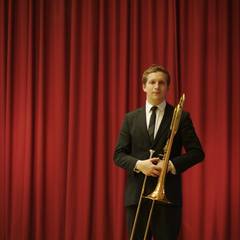 Edward is a fantastic bass trombonist, whom I have enjoyed playing with on multiple occasions. A commanding round sound, and a really good man who enjoys making music, I would recommend Edward to any amateur orchestra.