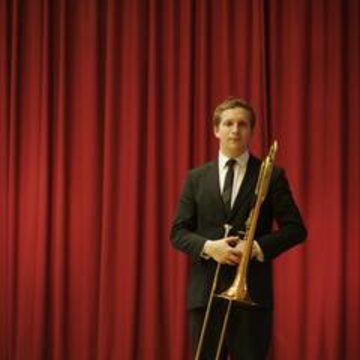 Check availability and get a free quote now - no commitment to book
From£180
About Edward
Reviews
Home page
Edward Mylechreest
Like Edward?
Watch & Listen

Freelance musician, based in London - Lower brass specialist, conductor, and composer Graduated from the University of Birmingham 2013 (BMus) Music Teacher at Tiffin School, studied at the Institute of Education/UCL MylestoneMusic.com for compositions, and other information As a performer, Edward is a highly sought after freelance Trombonist. He completed his ABRSM Grade 8 Trombone at the age of 16, having been raised in the music programs provided by the Salvation Army, originally starting on the Cornet. Brass Band’s have always been a part of his upbringing, however he quickly fell in love with orchestral and big band music as he progressed through his studies. Edward has been a member of a wide range of ensembles, spanning a whole cross-section of musical genres, including; University of Birmingham Music Society Philharmonic Orchestra, Big Band, Wind Band, Brass Band, University New Music Ensemble, Apollo Sinfonia, Wessex Youth Orchestra, In the Pink Big Band, Salvation Brass, Territorial Youth Band, Boscombe Citadel Band, Birmingham Citadel band, and the CCF 150 Parade band. He has also played in the pit band for shows including, Les Miserables, West Side Story and Bugsy Malone. He has performed in some fantastic venues, including the Royal Albert Hall, Symphony Hall (Birmingham), Festival Hall (London), Poole lighthouse, and Hammer Hall (Melbourne), has marched down the mall to then perform in Buckingham Palace, and has undertaken international tours in America, Canada and Germany as a performer. Whilst at university Edward studied Trombone with former LSO Bass Trombonist, Robert Hughes at the Birmingham Conservatoire. He has previously been tutored by Dudley Bright (LSO Principal Trombone), Susan Addison (Age of Enlightenment Orchestra Sackbutt), Alwyn Green (CBSO Bass Trombone), Kevin Smith (BSO Bass Trombone), Steven Mead (Euphonium Soloist), Steve Heyes, and Lloyd Bartlett. He performed as a recitalist at the University of Birmingham as part of his degree. Edward is available for all manner of concerts, recording sessions and rehearsals, as a Tenor Trombonist, Bass Trombonist, Sackbuttist or Valved instrumentalist (Euphonium, Baritone, Tenor Horn) – please get in touch for more information.