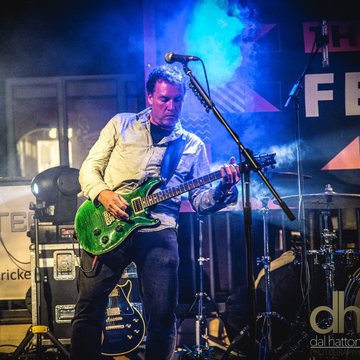 Started playing at age 7, started practising at age 13, finally got an electric guitar and amp at 15 and never looked back. Playing mainly in original rock band and teaching in the '90's essentially gave up bands and playing live and learned sounds recording. Got fed up with not playing out ion 2014 and went to an open Mic, met some great guys and formed Small Doses. Playing mainly in a few pubs in the area we played to over 8000 people at the 2016 Stratford River festival in the Saturday evening slot. In 2017 we will have played over 40 gigs in pubs and private parties. Still teach and have an online guitar tuition school MyGuitarTeacher and you tube channel Domwinter1967 ... look for them and you'll find them :-)

Superb band recently gigged at my 25th anniversary,2.5 hour set of quality music.i can strongly recommend you book this group for your party to guarantee an exceptional evening - thanks lads

Fabulous night at The Black Horse, Shipston! Thanks so much guys

These guys performed at my wedding recently, they were absolutely brilliant!! Rocked the venue over 2 great sets!! Music was ace and lots of friends and family have commented on how much they enjoyed them. Soooo worth booking!!!

My new favourite local band. Such a good night at the Alehouse tonight! - thanks guys :-)

Excellent covers band, great guys who know how to entertain and "down to earth" as well ... keep rockin' lads!!! :-)

Great band. Really down to earth. Always happy to involve the audience. Would highly recommend to anyone looking for a fun & enjoyable gig.