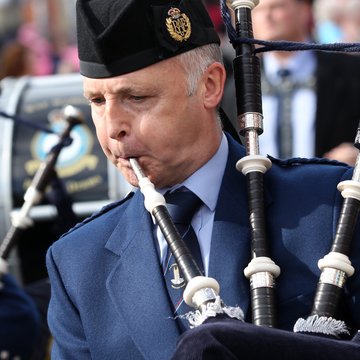 Robertson Bagpiping is owned by David Robertson who is originally from North Berwick in East Lothian, and now living in Lincolnshire. David has been a proficient bagpiper for many years and is available to be hired for weddings, funerals, Burn’s Nights, special events and corporate events. His piping experience has included playing and competing with pipe bands at numerous events, tattoos and major pipe band championships in the UK and Europe. Over the years, he has also successfully competed in solo piping competitions where his playing ability earned him a number of 1st places and highly placed finishes. His piping career started at a young age when he joined North Berwick Pipe Band and gained an excellent grounding in the art of piping. This has stood him in good stead for the rest of his career. David takes great pride and is passionate about playing bagpipes with lots of musicality and maintaining a finely tuned, quality sounding instrument. He has a large repertoire of traditional bagpipe tunes from which to choose for your event and will also cater for other styles and musical tastes.

Performance details
I can perform outdoors
I have a car I can use to travel to gigs
I require car parking close to venues
I can perform while walking around a venue
Musicianship
Genres:
Scottish music
See all genres
Instruments:
Bagpipes
See all instruments
Event types:
Wedding, Funeral / Memorial service, Private event, Corporate event, Burns night
See all event types

I will always be flexible to ensure your event runs smoothly.

I do not provide these services.

I require a room or area to tune the bagpipes for 30 minutes before event start time.

I mainly play traditional bagpipe tunes. However, I will learn a new requested tune if given enough time and it is compatible with the bagpipes.

Yes, I have my own bagpipes and will wear Highland Dress.

If given enough notice I can learn tunes that aren’t on my set list and that they are compatible with the bagpipes.

I have a great sounding instrument and play with lots of musicality.

I have played at wedding venues, military tattoos and Burn’s nights.

Standard Prices
All prices include:Play the bagpipes as requested during the event

Robertson Bagpiping played at our friends wedding. It was a perfect time filler between the meal to the evening do. He was great to watch, and it offered that something different, and although I knew the bride’s strong Scottish-ties, the bagpipes were still unexpected and they sounded fantastic 😄 it certainly helped make the day even more memorable.

What was already a very special day for my close friend on her wedding day! Having Robertson bagpiping added that something extra to the occasion, memory’s they will look back on forever.