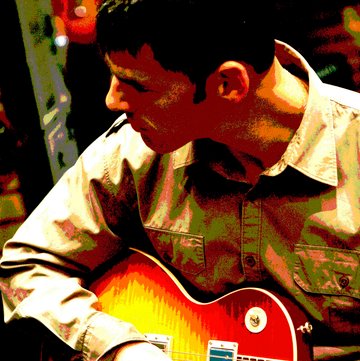 Started writing on piano and guitar in my teens. My first band was signed to an EMI subsidiary. After tours and records (yep, vinyl) I found myself being hired for session work and tours. I have spent around 15 years writing music for TV, Radio and Film and have had around 50 published tracks. As the guitarist and singer in the trio Namaqua, I have written and co-written several albums, EPs and MVs. Since mid-2015 I have been playing George Harrison on the Beatles tribute circuit and doing deps and sessions for functions. Influenced by Clapton, Beatles, Hendrix, Brad Paisley, Mark Knopfler and many others.

You Really Got Me
Hi Ho Silver Lining D
Handle With Care
Sweet Caroline G/C
Daydream Believer
I’m A Believer
All Shook Up A
Marie’s The Name Of His Latest Flame
Pretty Flamingo
Michelle
Shangalang
Crazy Little Thing Called Love
Teenage kicks
Sunshine of your love
Crazy little called love
Rebel Rebel
All or nothing
You really got me
Suspicious Minds
Handle with care
Help!
Yellow submarine
Hold your hand
I feel fine
Day Tripper
Twist n shout
Under The Bridge - Red Hot Chili Peppers
Valerie
Time Of Your Life - Green Day
Wild Wood - Paul Weller
Wonderwall - Oasis
She's Electric - Oasis
Free Fallin' - Tom Petty
Here Comes The Sun
Hide Your Love Away
Message In A Bottle
Every Breath You Take
Creep - Radiohead
Yesterday - Beatles
I don't want to talk about it - Crazy Horse
Travis - Why does it always rain on me
REM - The one i love
The Beatles - All my loving
Coldplay - Yellow
Simon & Garfunkel - Mrs Robinson
Customer questions

I am always flexible to help ensure your event runs as smoothly as possible. If timings change slightly in the run up to the event just let me know

Of course, no problem. This is a really popular request and we actually offer this service for free. If you'd like a DJ service via our PA after the final set until the venue closes, we provide this for an additional £100.

Usually set up about 1 to 1.5 hours before the performance time. As soon as the PA is set up I can provide a free playlist service to help set the atmosphere and get your guests ready for our live performance!

My set lists are crafted from countless performances and learning what works best to ensure guests dance and have an amazing time. However, we're definitely happy to chat through and make sure we find what works for your event.

Yes, absolutely! I bring my own instrument to play acoustically or electrically depending on the venue and function.

If a song isn't included in my song list there may still be a chance I already know it. However, if there is a special song you'd like me to learn I am happy to do this for you. There is a fee of £30 a song for this service to take into account rehearsal times etc.

Standard Prices
All prices include:I bring with me all PA and Lights. We can discuss the event in advance, timings and set up etc. I also carry an iPod to play any interval music if your in-house system doesn't cover this.
NEW!Virtual services
Personalised Music Message
Book me to create a unique music video for you to send to a friend as a gift. This could be a birthday message, first dance song for a wedding anniversary, or just your friend's favourite song to cheer them up.
£15

One evening in December, chaos erupted in the quiet village of Stock. The Harvard Inn opened its doors for the first, but not the last time, to The Beatles. With a little help from their friends, the place ended up rocking! We were transported through decades of wonderful hits. There was singing, dancing and swaying of hands. Thank you for a wonderful evening.

Verified
Michael A, 2 years ago

I was reminded today that we were going to hire a DJ. Haha, I'm so glad we hired your band. Nothing but good things to say about you, nothing but sore feet the next morning. Loved your version of While My Guitar Gently Weeps. Truly amazing!

What can I say but thank you so so much. Our special day was even more special by the band. Everyone talks about 'the band' now. Our personal thanks for performing our favourite 'Something' for our first dance. It was beautiful, made me cry with happy tears. You are all fantastic. Hope to see you again!

I don't know how you three managed to pull it off but our friends are all over 60 and not one of them was sitting down all night. That's a first for an old gits party!! Seriously, many thanks for the huge night of entertainment and congratulations on the big Broadway part to Dave, you deserve that gig!

My wife hired you because you had a few Cream songs on your set list and she thought your clips on your website were good. It was all a surprise to me as you may recall but I can honestly say as an ex-Cream roadie, you fellas were amazing. The best covers of Cream and Hendrix I've ever heard and a really tight band all night. Obviously well rehearsed and in love with the tunes and it showed. It was a great night and thank you for being so cool!

You really made our day, thank you. It was a fantastic show and everyone was up dancing. Even the non-dancers! Fantastic, so accurate. Good luck with the tour!

Beatle-Tactic. You made our gala evening spectacular. I don't think everyone expected such an incredible show. The dancers were absorbed for the whole show and those just watching were in awe. Soon many great comments to our organisation folks about the Beatles. Looking forward to our summer ball as I know you're already booked for it!

You guys are unbelievable. I was stunned with the accuracy as a lifelong Beatles fan. The phrasing and harmonies are outstanding. I know you're all from Broadway and West End but your passion and enthusiasm prove you are real fans for me. Looking forward to by big birthday. You'll be booked again!

Verified
Charlotte A, 4 years ago

Excellent night of entertainment. The duo playing during our meal was a perfect pace for us. I know you even managed to get some to dance instead of eat :) Everyone loved the second half show, a great flashback to my youth! Fantastic music and you are lovely guys. Thanks very much!

After deciding last minute we wanted a band for our work Christmas do I was given The Retro Vibe’s details. Arranging them to come and perform at our venue couldn’t have been easier. The age of guests ranged from 19- 65 so we were slightly nervous as to whether the music would suit all tastes. We had nothing to worry about because within minutes the band had us all up dancing! It was a really top night of music. When we all returned to work after Christmas my staff were talking about the band constantly, a good sign after so many festivities!

You absolutely have to see this band live, great harmonies, soulful guitar work

Singers in the UK
Singers in Horsham
Singers in Chichester
Singers in Surrey
Singers in Brighton and Hove
Singers in Guildford
Customer Service
Discover
Company
As seen on
© Encore Technologies, Ltd.
Crafted with bagels and in London