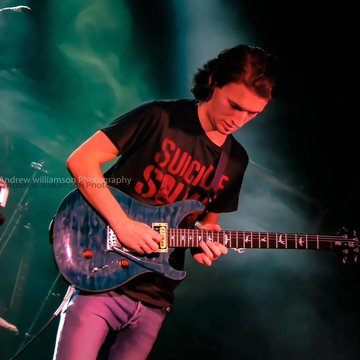 The shred lord from Barnsley!

Dan has been a musician for over a decade and within that time he has gained lots of experience and has become an exceptional guitarist and vocalist. His greatest accomplishment arrived in 2018 when he graduated and achieved a First Class Hons degree from the University Campus of Barnsley in Popular Music. He has gigged in bands, duos, as a soloist and has a very easy to work with attitude. His first instrument is definitely electric lead guitar (which he has achieved Grade 8 in) and in addition to this he sings as well. Dan specialises in various sub genres of rock such as blues rock, pop rock, glam rock, hard rock, grunge, thrash metal, psychedelic rock, neo classical metal and soft rock etc. He covers very popular rock artists too that are generally upbeat such as KISS, Bon Jovi, Jimi Hendrix, Fleetwood Mac, AC/DC, Pink Floyd, Eagles, Living Colour, Nickelback, Megadeth, Tom Petty And The Heartbreakers, Malmsteen, Satriani and Nirvana. He also does originals too and is happy to vary his long set-list to whatever suits the venue most. Dan has his own amplifiers, equipment and transport etc. Based in Barnsley, South Yorkshire, Dan is now looking for various gig opportunities across the north of the UK.

If you are wanting to change the timings after booking me, just let me know and I will try my best to be flexible. I am open minded when it comes to schedule changes but I would like at least a few days or weeks notice.

I can create a Spotify playlist on my Iphone, plug it into the venues mixer, (if the engineer has the right cable) featuring songs of anybody's choosing to have playing between and or before my sets for free.

Being a solo artist, I am flexible to set my equipment up either just before my sets (roughly 15 minutes) or any time the venue requires me to have my gear set up. I do have my amp, guitars, stands and pedals but I am very used to setting these up.

Yes, I am very open to doing songs that will please the crowd and venue the most as that is what I aim to do. If there are songs on my set list that you would like me to play more than others, please let me know and we will come to an arrangement.

Apart from the mixing desk, amp mics, speakers and DI box, yes. I bring my own amp, guitars, stands, leads and pedals etc. I do have my own vocal mic but I don't bring this as I know most venues have one.

I am more than open to learning new songs to suit the occasion of the event. I can learn songs very quickly depending on the difficulty. If the song(s) is fairly challenging I would require at least a days notice and an additional fee of £30 in order to cover extra rehearsal time.

Most people who I have performed to enjoy the fact that I play guitar to a very high standard and perform songs that a lot of people enjoy but at the same time aren't over played. I have been complemented on my vocal skills and have delivered these results consistently.

I have performed at the Old School House (Blackburn Lane Barnsley), The Royal Standard (aka The RS Bar, Sheffield) The Old Crown (Sheffield), The White Bear (Barnsley), Pour House (Barnsley) and The Norman (Barnsley).

The highest profile gig I feel I have performed at so far was at the Norman last August as it had the biggest outdoor crowd I've ever played to. I enjoy playing to large audiences as it provides me with the opportunity to bring more pleasure to more people.

Dan Carson is such a talent. Get to see him if you can. You won't see a better guitarist anywhere!!!!

Can recommend Dan for any gigs around South Yorkshire

An extremely talented guitarist who isn’t afraid to perform songs you wouldn’t expect to hear.

I have known Dan for around seven years. During that time, he has shown himself to be a capable and hardworking musician. He is a disciplined person with a lot of determination to be the best that he can be. As a result of his hard work, he gained a first class honours degree whilst studying at University Campus Barnsley. He is a versatile guitar player with the ability to play in a number of different styles from metal to jazz. He also has an excellent theoretical knowledge, including perfect pitch, which enables to work strongly as a session musician and performer. Dan has always been comfortable in the limelight and is happy player to large audiences of any size. He also has a skill and creative sensibility for composition and has created and performed on a number of works written by himself. Dan is a true musician with a strong work ethic and integrity towards anything that he decides to do. I wholly recommend him as a guitarist to you.

I know Dan from his student days and since then he's just got better and better. A man who takes his music very seriously and always worth a listen to.