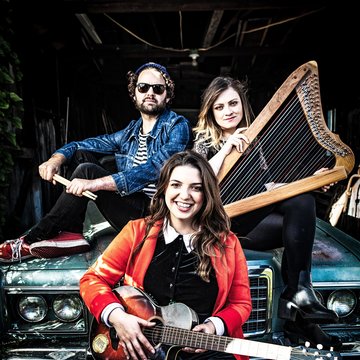 I host regular house concerts and booked HEARD Collective (comprising Daisy Chute, Cerian Holland and Martha Paton on this occasion) for our October 'gig'. Given this was my 52nd house concert and I'm an avid gig goer I have seen and heard (pun-alert: apologies!) pretty much everything there is to see and hear! Yet the vocals, the instrumentation and the performance from these three musicians exceeded the already high expectations I had. Most of the 50+ audience had no previous experience of them. It is safe to say that it was the most fabulous evening of entertainment and everyone was thrilled by the fun we had, the impromptu sing-a-longs and the musicianship. The laughter for the 'banter' and the raucous applause for the music was long and loud and heartfelt. I have had nothing but praise in the feedback and some of the 'old-timers' (who have seen the majority of the house concerts) have said this is amongst the top three gigs they've attended. I can assure you that this is high praise. PS. They are also clean, tidy, smell nice and didn't eat or drink me out of house and home

We booked Daisy Chute and the Heard Collective for a private gig. What can I say? Well, they surpassed all expectations and gave us a fabulous evening of music and laughter! These artists are all talented multi-instrumentalists, each with their own individual style and strengths. Daisy and Cerian exude a natural charm and warmth which quickly won over the audience, creating a great atmosphere for everyone. Meg Ella and Jessie Reid added their exquisite instrumental skills and evocative vocals to the mix. We had such a great evening and each artist gained many new fans. We'd book them again without hesitation.

We booked Daisy and Alex for my 60th Birthday Party at a nice hotel in Oxford in January 2019. They provided us with a perfect evening of music, the first set being some beautiful jazz classics with dinner, including amazing performances as requested of ‘New York State of Mind’ and the ‘Nearness of You’ sung for my wife. The second set was contemporary with a jazz twist, Beatles, Van Morrison, Dusty etc. Daisy has a beautiful voice that can perform sweet romantic songs right through to great dance classics, and is brilliantly supported by Alex on piano. They are a delight to listen to and create a great vibe. A number of my guests want to buy the music – highly recommended!