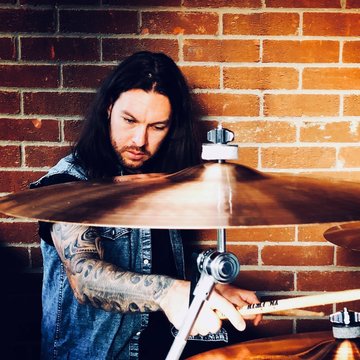 Chris is a session drummer based in the south of England. While experienced and currently working across many genres, Chris specializes in Rock and Metal, and has a great understanding of what that part of the industry requires. Born in the south of England in 1988, Chris was raised on his mum and uncles cassettes and records, showing his first interests in music sat in front of the Freddie Mercury tribute concert aged just 3 years old. Getting his first drum kit aged 9, he began playing along to Queen, Led Zeppelin, Iron Maiden and Metallica, before finding influence in more experimental and technical music like The Mars Volta, Tool and SikTh, fused together with the in-demand groove of modern day pop music, Chris really started to develop his own unique style and sound. Chris' first payed session was aged 12, doing a short spell of theatre shows as part of the pit band and by 16 was playing the local pub circuit. Touring started at age 18 with his first professional band Shy of the Depth before joining UK metal band Malefice, signed to Metal Blade records. This began extensive UK and European tours with Devildriver, Arch Enemy, Anthrax, Testament and festival appearances alongside Iron Maiden, Def Leppard, System of a Down and Linkin Park. In 2014, Chris decided to step away from Malefice to work as a session drummer, playing and recording for artists and bands worldwide. Chris has appeared on Scuzz TV, Kerrang!, Sky One, Radio 1, BBC 4 and you can even hear his drums while watching UEFA Champions league football. He has toured extensively throughout the UK and Europe and has appeared on major label releases. Some of Chris' personal highlights so far have been playing Download Festival at Donington Castle, cruising the Mediterranean on the Runaway with Jon Bon Jovi cruise, recording a session at the infamous Abbey Road studios and playing a tribute solo to Cozy Powell at his memorial plaque unveiling in 2016.

Standard Prices
All prices include: Set-up, soundcheck, waiting, performance and pack-down. Plus travel & fuel
NEW!Virtual services
Remote Recording
Professionally remote recorded drum tracks, for your music, recorded in my purpose built studio. We can start with demos if you need drums written, and you'll receive mix ready WAV files to add to your project. No matter where you are in the world, this service is available to you
£95

Awesome drummer, a really nice and easy guy. So hard to find this kind of pro and talented musicians on this days. Very pleasure to work with.

I have been producing for over a decade now and I've worked with Chris more times than any other drummer. I’ve had the pleasure of recording him over a vast variety of projects some where he was the artist, others he was a session player and the styles have ranged from jazz to rock and pretty much all forms of metal. Over the years Chris has proved what a great and versatile musician he is, he always delivers the goods to the highest standard. In the studio, Chris is prompt to arrive, his gear is always top notch and he is hungry to work. He is always prepared but knows to leave a little room for the “on the day” magic. It's obvious Chris is not only an exceptional drummer but a keen songwriter too, he knows exactly whats needed, whether that be keeping it simple and laying down the groove or flaring it up and getting out the chops. In some cases we have even rearranged songs together whilst recording. Chris is quick to adapt, he doesn’t fear change and can take ideas thrown at him to the next level. I’ve always enjoyed working with Chris and would recommend his drumming to all producers and bands out there

Amazing! You've got Cozy's spirit. That really touched me!

Awesome drummer, a really nice and easy guy. So hard to find this kind of pro and talented musicians on this days. Very pleasure to work with

There’s nothing harder than to keep the beat when everything is in flames on a rock song. Chris kept the beat, kept the flames, with a smile and in style. A Swiss army knife musician. Talented and professional.

Genuinely amazed by the preciseness that Chris showed on our songs, it was just like listening to the album at the first go. You won't even need a practice before getting on stage!

Drummers in the UK
Drummers in Horsham
Drummers in Chichester
Drummers in Surrey
Drummers in Brighton and Hove
Drummers in Guildford
Customer Service
Discover
Company
As seen on
© Encore Technologies, Ltd.
Crafted with bagels and in London