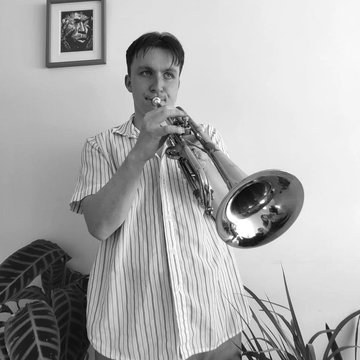 Charlie Humphrey-Lewis is a 20-year-old trumpet player, improviser and composer/arranger currently studying at the Birmingham Conservatoire.
3 of 6 photos
Trumpeter
Birmingham

Charlie is a student at the Royal Birmingham Conservatoire, where he is studying a Bachelor of Music in jazz. He is fortunate enough to receive one to one tuition from Percy Pursglove, Steve Fishwick, Byron Wallen and Mike Williams. Furthermore, he has been coached by some of the world’s finest musicians currently on the scene, such as Soweto Kinch, John O’Gallagher, Arnie Somogyi, Clark Tracey, Mark Hodgson, Ed Puddick, Andrew Bain and Jeremy Price. He has valued every single moment and experience given to him so far whilst at the Royal Birmingham Conservatoire and will be completing his degree in 2022. Charlie has performed at countless venues across the UK including venues such Birmingham Symphony Hall, Derby Cathedral and the Eastside Jazz Club. More recently, Charlie was privileged to record an online set of music for Cheltenham Jazz Festival with fellow colleagues from the conservatoire alongside world-renowned saxophonist Soweto Kinch. He has also performed with Percy Pursglove, John O’Gallagher, Julian Joseph and many others. Currently, he is the leader of his own group called the C H-L Five that plays a mixture of original compositions and arrangements. Charlie also features as a sideman in several bands including the Andrew Duncan Sextet and the David Bustos Quintet. Charlie also works commercially, leading a horn section that consists of himself and two saxophones. With this group, Charlie has performed at the Bull Ring, the crescent theatre and at, Aston Villa’s, Villa Park stadium as part of the MBCC awards ceremony 2020.

There will never be another you
I'll remember April
All the things you are
Autumn Leaves
Bags Groove
Embraceable you
Footprints
How high the moon
If I were a bell
Round Midnight
So what
Impressions
Stella by Starlight
Take the A train
Nica's Dream
Cherokee
Confirmation
On green dolphin street
The Girl from Ipanema
Someday my prince will come
St Thomas
Mr PC
Bye Bye Blackbird
Softly, as in a morning sunrise
Alone Together
All of me
The blues
Rhythm changes
ETC.
I can also easily learn any original music.

A fantastic night of entertainment!

The Horn section added a new dynamic to our live show. They were just WOW!