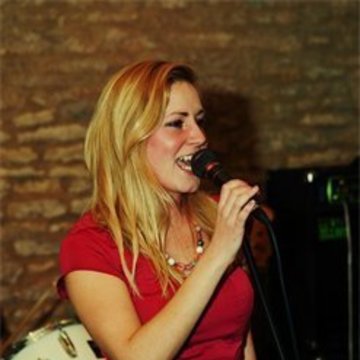 Previously signed to a major record label, Carley has worked alongside some very well known producers and who also offered her a publishing contract as testament to her song writing ability. A full time Musician, Carley fronts Taylormade capturing the audience with her soulful voice and passionate performance. With her first live performance at the tender age of 10, and now with over 16 years experience at performing live, she knows just how to put on a show! Her powerful voice and incredible range allow her to sing any song with ease, and not only does she front The Taylormade Live Band For Weddings, Carley is also one half of Taylormade Acoustic Duo, one of the UK's most popular and sought after Acoustic Wedding Music Duos. This means from performing traditional tracks like 'Amazing Grace' to the party tracks like '9 to 5' by Dolly Parton, Carley will have you captivated throughout the night.

Performance details
I can perform outdoors
I have a car I can use to travel to gigs
I require car parking close to venues
I can perform with backing tracks
I can perform while walking around a venue
My equipment is PAT tested
I own a PA system
Encore awards
4th Encoreversary
Musicianship
Genres:
Pop, Acoustic
See all genres
Instruments:
Singer
See all instruments
Event types:
Wedding
See all event types

Verified
Julie B, 2 years ago

We celebrated our wedding on Saturday 13th July and felt we had to leave a review for Carley & Matt.One word ....Amazing !!!!.From the very first email sent Carley was professional and totally put our minds at ease in preparation for the big day.One of the songs we wanted wasn’t on the playlist but they were happy to learn a new song for us which we thought was a lovely touch. Carley & Matt played during our ceremony and one of our guests thought it was the actual recording,not realising they were playing in the balcony area!!😊During our drinks reception and wedding breakfast our guests commented on how amazing they were and how it was lovely to relax and enjoy such great voices. A huge thank you to both of you for making our day so special ...the performances from start to finish were perfect.

Thank you so so much for playing at our wedding last week, you made the day so magical. From the beautiful music during our ceremony (I will never forget hearing your beautiful version of “I can’t help falling in love” as I walked down the aisle - I think that was my favourite moment of my whole life), to the gorgeous drinks reception music, to the absolutely brilliant band sets in the evening, you were just perfect. You kept the dance floor filled the whole night and many of our friends and family came up to me to specifically comment on what a fantastic band you are. Having you also organise the DJ sets between the band sets as well worked so well, and made the music throughout the whole evening run so smoothly. And of course thank you so much for learning “Walking on sunshine” for our ceremony exit! Your communication throughout the whole wedding planning process was outstanding, and you have made us feel in such safe hands from the moment we first heard you play at the Crockwell open evening 18 months ago. You and Matt are just wonderful (and the rest of the band of course). I cannot recommend Taylormade highly enough ❤️

Verified
Julie B, 3 years ago

My husband and I couldn't recommend this band highly enough. Carley was fantastic throughout the entire wedding planning process and on the day itself the band were exceptional. We felt that it was an excellent idea for the band to hold a showcase event before booking them as it was great to hear them in advance. However, it only took one song for us to be convinced at how great the band was and how we definitely wanted to book them for our wedding. Since our wedding day we have had so many comments and messages from our guests to say how fantastic the band were and how much they had enjoyed their performance. A few guests said that they felt that Taylormade were better than any band they had seen at a wedding before. They also learnt our first wedding dance song, Latch, which was sung beautifully and was a very personal and special moment for us. Please don't hesitate to book Taylormade Duo and Live Band, you really won't be disappointed. Thank you so much for everything, Mr and Mrs Bishop xxx